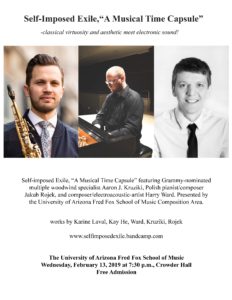 Self-imposed Exile educational mission is to advocate for the implementation of non-idiomatic improvisation into academic curriculum and to propagate and disseminate widely this artistic form of expression. In more detail, the ensemble explores an experimental concept and process of a non-idiomatic improvisation following the classical approach to building of a larger form. However esoteric and intangible, these processes occur in the lacuna between composed and improvised environments allowing creation of another organically formulated music paradigm.