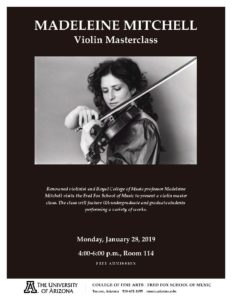 Madeleine Mitchell has been described by The Times as ‘one of Britain’s liveliest musical forces (and) foremost violinists’. Her performances in some 50 countries as soloist and chamber musician in a wide repertoire are frequently broadcast for television and radio including the BBC Proms, ABC (Australia), Bayerischer Rundfunk, S4C and Italian TV when she won the Palma d’Oro, praised both for her vibrant lyrical intensity and pioneering creativity. She will present a master class for UA undergraduate and graduate students.