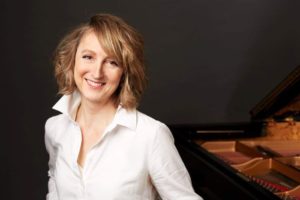 This project has been made possible by a grant from the Alan Fox Endowed Chair for Director of Music in the Fred Fox School of Music.

Bernadette Harvey will teach a master class featuring undergraduate and graduate piano performance students from the University of Arizona Fred Fox School of Music. This event is free and open to the public.

Dr. Bernadette Harvey is Senior Lecturer in Piano at the Sydney Conservatorium of Music. An acclaimed international performer and teacher, she was awarded the Centenary Medal in 2000 by then Australian Prime Minister, John Howard, for her contribution to Australian Music. Dr Harvey has won many accolades since her first medal in a Sydney Eisteddfod at the age of two and a half, including the ABC ‘Young Performer of the Year’ in 1987.

As guest artist for the past eleven years at the ​Tucson Winter Chamber Music Festival​ in Tucson, Arizona, she has worked with such artists as Ani Kavafian, Joseph Lin, Antonio Lysy, Paul Coletti, Alan Vogel and David Schifrin. She presented the world premiere there of a piano quintet by Pierre Jalbert and performed with the Tokyo Quartet in Carl Vine’s Piano Quintet, ​Fantasia​, premiered in 2013 with the Shanghai Quartet in Tucson and again in Australia for the Melbourne Festival in October 2013. She and the Shanghai Quartet presented the Australian premiere of the Bright Sheng Piano Quintet, ​Dance Capriccio, ​and more recently she has released a CD ​Alchemy, ​with the famous Jupiter Quartet, recorded in 2019 for the Canadian label Marquis, and presently being nominated for a Grammy Award.

Bernadette Harvey performs regularly as a Musica Viva Artist in Australia and with the ABC. She has had several new piano concertos written for her, including ​Rubia​ by Melbourne composer Tim Dargaville which she premiered in Melbourne with the Academy of Melbourne Orchestra, and by Ross Edwards, and Donald Hollier. She recently gave the Australian premiere of ‘Night’, the first Piano Concerto by her American colleague Kevin Puts, performed with the Llewellyn Sinfonia, conducted by her sister Rowan Harvey-Martin in Canberra.

Her upcoming performance/collaboration with the artist Cornelia Parker’s installation ‘War Room’ at Sydney’s Museum of Contemporary Art in January 2020 for the Sydney Festival introduces a new and evocative piano sonata ‘Ode’ by Peggy Polias – a reflection on the apocalyptic nature of war. The concert is another in Harvey’s series ‘The Sonata Project’.

Her playing has been described by one reviewer as: “Gifted with a rare physical control of the instrument and intellectual and interpretative qualities to match…dispatched with a Horowitz-like virtuosity…blisteringly virtuosic…It drew me to the edge of my seat.” (Neville Cohn, ​West Australian​).