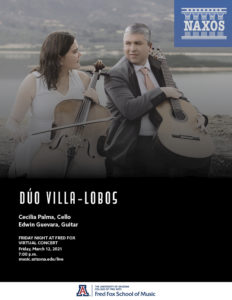 Since 2003 the Villa-Lobos Duo has been a stable and consolidated chamber music duo with 18 years of research. They began to work at the Superior Conservatory of Music of the Liceu in Barcelona (Spain) under Guillem Pérez-Quer. The Villa-Lobos Duo has performed concerts at different festivals, auditoriums, and theaters in Europe, the United States of America, and South America. They have specialized in original repertoire music for cello and guitar. Likewise, they have created their works and arrangements based on different classical and popular styles. Since its inception, the Villa-Lobos Duo has encouraged composers to write original pieces for this unconventional chamber format. In addition, several of these works have been dedicated to them by great composers such as Leo Brouwer (Cuba), Atanas Ourkouzounov (Bulgaria), Blas Emilio Atehortua (Colombia), Jorge Miguel González, Carles Guinovart, Francesc Taverna Bech, Gloria Villanueva, Josep Galeote ( Spain), Jaime Zenamon (Bolivia), Arnaldo Freyre (Brazil), Jan Freidlin (Russia), Gerard Drozd (Poland), Ricardo Pauletti (Brazil), Leonardo Le San (Colombia), Sergio Menem (Argentina), José Antonio Guerrero ( United States – Mexico), Giorgio Tortora (Italy), Pedro Sarmiento (Colombia), among others. They won the highest contemporary music award at the Arjau European Interpretation Festival in Barcelona ​​. They received the Octavio Marulanda Morales distinction of honor awarded by the Ruitoqueño Festival in Colombia. In 2017, the Duo was invited by the University of Michigan to perform the festival’s inaugural concert “En Español: Sonidos de la Hispanosfera”. This great event took place at the Stamps Auditorium of the Walgreen Drama Center. They performed the festival’s main concert at the mythical Hill Auditorium in Ann Arbor, premiering the “Great Symphonic Concert La Madre Monte” for Cello, Guitar, and Symphony Orchestra Op. 198. This work was written and dedicated to the Villa-Lobos Duo by the Bolivian-German composer Jaime Zenamon. They were accompanied by the Philharmonic Orchestra of the University of Michigan under Oriol Sans Arrufat (Spain) direction in February 2017. The Villa-Lobos Duo released their first record production, “Music for cello and guitar,” under classic NAXOS. This production opened the cello and guitar chamber music line on that record label with a repertoire from Eastern Europe and South America. The CD contains pieces by the composers Dusan Bogdanovic (Serbia), Jaime Zénamon (Bolivia), Sergio Assad (Brazil), Atanas Ourkouzounov (Bulgaria) and Edwin Guevara-Gutiérrez (Colombia). The recording was made at the Luis Ángel Arango Concert Hall of Banco República de Colombia in January 2016. This is the first record production in Colombia for this world’s leading record label in classical music. The CD was also on the record company’s bestseller list for the first month of release. In May 2018, they debuted within the program of the Teatro Mayor Julio Mario Santo Domingo. Likewise, in June 2018, they performed as soloists accompanied by the Bogotá Philharmonic Orchestra under Robin O’Neil’s direction (England). The Villa-Lobos Duo has had an excellent reception among the public and specialized critics with comments and reports in various digital and physical media such as The Classical Guitar Magazine, The Violin Channel, Musicalifeiten, Memoirs Classical Guitar Magazine, David’s Review Corner, A Tempo . , El Tiempo, El Espectator, Arcadia, among others. Thanks to his work, they are valued as the most referenced Cello and Guitar Duo in the world. They are currently studying DMA at the Fred Fox School of Music at the University of Arizona in the USA, with Dr. Theodore Buchholz on Cello and Professor Thomas Patterson on Guitar. They are preparing their new CDs as a duo, cello solo, and guitar solo, all as Naxos artists. Cecilia Palma is a cellist with the Bogotá Philharmonic Orchestra and is an associate professor at the National University of Colombia, and an artist from Naxos. Edwin Guevara-Gutiérrez is a professor at the Sergio Arboleda University. Also, he is a Naxos artist, Knobloch Strings, and his compositions are edited by Bergmann Editions of Denmark.

Notes to the Program.

Bossa Nova for Tahnee was composed by Edwin Guevara in July 2020 and dedicated to the Brazilian professor Tahnne Bucher Da Silva. The latter works at the CESL of the University of Arizona. This work is written based on the interpretation of the traditional Brazilian rhythm called Bossa Nova. It has contrasting harmonic turns, always accompanying a very cantabile melody. It includes some percussion effects imitating the tambourine and the snare drum, which are used in traditional Brazilian music groups.

Leo Brouwer, the renowned Cuban composer, and guitarist has been instrumental in developing the guitar repertoire in the last 80 years. His magnificent creative production has led to his music being frequently programmed on each stage or recording. An example of this is the work Lorquianas that Leo Brouwer dedicated in 2018 to the Duo Villa-Lobos as a sign of friendship of many years between composer and interpreters. The work is based on two poems by the famous Federico Garcia Lorca. Lorquianas was premiered by the Duo Villa-Lobos in 2019 at the Conservatorio Superior de Musica del Liceo de Barcelona in January 2019, with the composer’s presence and celebrating his 80 years of life.

Atanas Ourkouzounov has been one of the most important contemporary composers for the guitar for several years. His music has different compositional styles where the Balkan region of Europe’s popular tradition is always present. This is Rhodope, Song, and Dance, written and dedicated to the Duo Villa-Lobos in September 2020. In the first album of the Duo with Naxos, there is another of his works for Cello and Guitar called Tanzologia. Rhodope, Song, and Dance represent the great friendship that the composer has with the performers.

Astor Piazzolla, a representative figure of tango worldwide, has filled audiences as a bandoneon player and a composer for many generations of interpreters worldwide. The works selected for this concert (Oblivion and Adios Nonino) belong to that extensive repertoire with so many followers of this great Latin American genre. Astor Piazzolla is considered the new tango’s composer by incorporating elements of the contemporary avant-garde with the reorganization of the traditional elements of tango. Oblivion was composed in the United States in 1982. Adios Nonino is perhaps Piazzolla’s best-known work, written in 1959 in honor of his father. The latter passed away while the artist was touring Central America. The selection of these two pieces belongs to one of the first stages of the Duo Villa-Lobos. They compiled several tangos by Astor Piazzolla and grouped them in pairs, joining them with improvisations.

Edwin Guevara, guitarist and composer of the Duo Villa-Lobos, wrote this Fantasia for cello and guitar in 2015. The entire work’s main idea is to incorporate rhythms and forms of the popular Ibero-American tradition (such as Passacaglia, Ciaccona, Venezuelan waltz, Guabina, Bambuco, Chacarera, Malambo, Milonga, Joropo, among others,) with tonal and twelve-tone elements of contemporary tradition. It is a work that explores virtuosity and sounds that go from the most piano to the strongest and from the slowest to the fastest. This work was the one that Naxos used for the worldwide launch of the album “Music for Cello and Guitar” by the Duo Villa-Lobos.