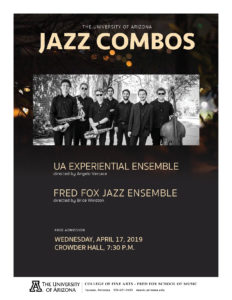 The UA Experiential Ensemble, under the direction of Dr. Angelo Versace, and the Fred Fox Jazz Ensemble, directed by Brice Winston, will perform a combined small ensemble concert in Crowder Hall on Wednesday, April 17, 2019 at 7:30 p.m. This will be the final concert in the Jazz Area for the 2018/19 school year.

The ensembles will perform an eclectic mix of arrangements from the American Songbook as well as original compositions or arrangements on standards.

Saxophonist and composer Brice Winston is a native of Tucson, AZ, but cut his teeth learning jazz in the city where jazz was created – New Orleans. For more than 16 years he lived in New Orleans performing with countless local musicians and several world-class figures including such notables as Brian Blade, Ellis Marsalis and Nicholas Payton. After touring with Nicholas Payton’s band for a year, an acquaintance with band leader and composer Terence Blanchard developed into a close musical relationship that continues to this day. Brice has been touring with Blanchard for over fifteen years, an association affording him the opportunity to perform all over the world with some of the greatest musicians alive including Herbie Hancock, Dianne Reeves, Lionel Loueke and Dave Holland. Brice has recorded 7 CD’s with Blanchard including the Grammy Award winning CD,A Tale of God’s Will – A Requiem For Katrina as well as more than 15 movie scores for film director Spike Lee among other directors. After returning to Tucson in the aftermath of Hurricane Katrina in 2005, Brice found himself becoming increasingly involved in jazz education. After teaching briefly for the Tucson Jazz Society’s educational program Tucson JazzWerx, Brice joined forces with bassist Scott Black and trombonist Doug Tidaback in 2008 to form the Tucson Jazz Institute (TJI). TJI has since gone on to win top awards at festivals and competitions all over the United States, becoming a model of jazz education for the world. September 19, 2014 marked the release of Brice’s sophomore recording,Child’s Play, recorded in Brooklyn, New York with some of the most cutting edge and in-demand musicians on the jazz scene today, with Mike Moreno on guitar, David Virelles on piano, Joe Sanders on bass and Marcus Gilmore on drums. Most recently, Brice has joined the music faculty at the University of Arizona, is a resident artist/educator at Northern Arizona University, and continues to perform in jazz clubs, concert halls and jazz festivals all over the world.

Jazz pianist Angelo Versace, a native of Indiana, Pennsylvania, has been the director of jazz studies at the University of Arizona since 2014. He attended William Paterson University from 2004-2008, studying with Mulgrew Miller, a seminal figure in jazz and a man whom Versace cites as being a main musical influence. He subsequently earned his Master of Music and Doctor of Musical Arts degrees from the University of Miami, studying jazz piano, jazz pedagogy, composition and arranging. During his time in Miami, Versace was on faculty at the Superior Academy of Music – an award-winning institution backed by the Royal Conservatory Music Development Program. He also was on faculty at the CGCC Community Arts Program and Dillard High School – high school jazz band programs that found success at the prestigious Essentially Ellington competition. He began to work for the Tucson Jazz Institute (the two-time winner of the Essentially Ellington competition) after his move to Arizona in July of 2014. Versace has performed on twelve studio albums: two as a leader and ten as a sideman, including Jazz Hymns with guitarist Jerry Hahn and Kristian 3.0 with Take-6 vocalist, Khristian Dentley. He has also had the privilege of working as a sideman with several internationally recognized artists: Lewis Nash, Warren Wolf, Marcus Printup, Brice Winston, Joe Saylor, Troy Roberts, Dave Stryker, Roxy Coss and Chuck Israels. Versace travels yearly to Taipei, Taiwan where he is on faculty at the Fu Jen University Jazz – a camp which coordinates with the American Institute of Taiwan Jazz Outreach Program. Most recently, he has been a member and appointed board director of the newly minted Tucson Jazz Collective (TJC). The group, which has performed for the SAACA Jazz Legends Concert with vocalist, Becca Stevens, continues to perform in and around Southern Arizona.