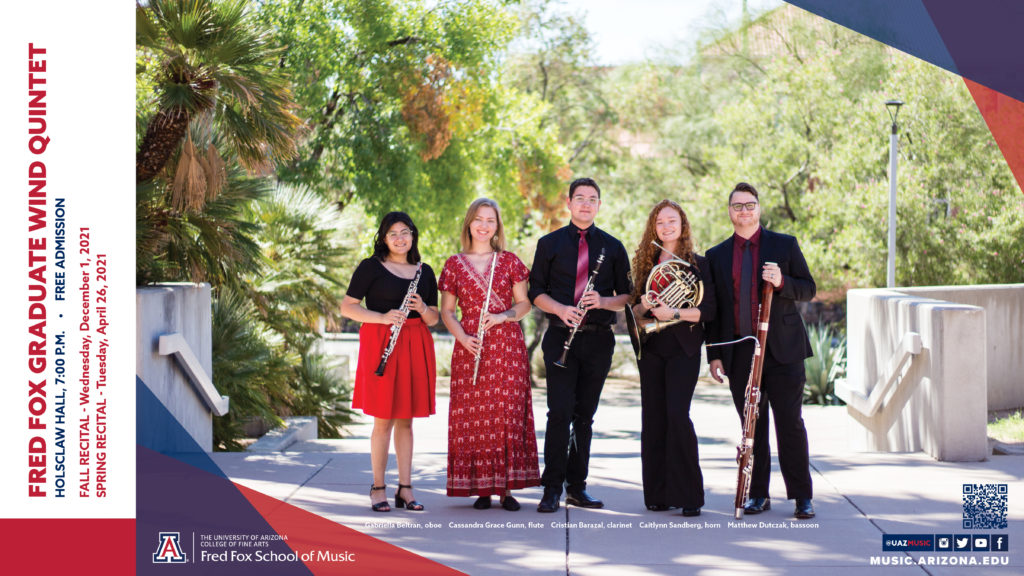 Cassandra Gunn is from Lansing, Michigan and completed her bachelor’s degree in music performance at Oakland University. Having begun her orchestral career in the Michigan State University Concert orchestra, Cassandra then served as the second flutist in the Oakland Symphony Orchestra from 2017-2019. Being a passionate teacher and performer, Cassandra enjoys teaching private lessons, and during her time at Oakland University she performed as a freelance musician in multiple chamber ensembles.

Gabriella Beltran comes from San Benito, Texas and has studied the art of oboe since 11 years of age. She received her Bachelor of Music degree in oboe performance from Texas A&M University-Kingsville under the direction of Dr. Ann Fronckowiak. Before graduating high school, she had the opportunity to perform twice at the Texas Music Educators Association convention with the All-State ensembles and once more during her undergraduate degree as principal oboist with the TAMUK Wind Symphony. Gabriella plans to receive her master’s degree from the Fred Fox School of Music and find her place in the music world of performing and teaching wherever it may take her.

Cristian Barazal is from Miami, Florida. He graduated from New World School of the Arts, in Miami, in 2016, where he studied under Dr. Christopher Graham. During his time at New World, he participated in FMEA All-State ensembles in all four years and had the opportunity to serve as principal clarinetist of the FMEA All-State Symphony Orchestra twice. He also had the opportunity to attend Eastern Music Festival in 2015. After graduating in 2016, Cristian went on to pursue his bachelor’s degree in clarinet performance at the San Francisco Conservatory of Music, where he studied under Jeff Anderle and Jerome Simas. Cristian is now pursuing his master’s degree in clarinet performance at the University of Arizona, studying under Dr. Jackie Glazier.

Caitlynn Sandberg is currently a horn performance major and graduate assistant to Johanna Lundy at the University of Arizona in Tucson. She is expected to graduate in the Spring of 2023 and plans to continue her schooling in Europe. A Los Angeles native, she completed her bachelor’s degree studying with Dr. David Hoover and then Dr. Annie Bosler at California State University Northridge in 2021 where she played as principal horn in the Wind Ensemble, Symphony Orchestra, British Brass Band and Horn Ensemble. While in Los Angeles she was a consistent freelancer and private teacher and one of the founders of 5th Floor Brass Quintet. Building her private studio for the past couple of years she has also coached horn and other brass at the middle and high school level. Stepping into the jazz scene, she has also performed in jazz recitals and performed the entirety of Miles Davis’s Birth of the Cool album with The New Nine in Long Beach. She has also performed with the Los Angeles Classic Rock Orchestra, The Tribe Band and Orchestra, PSYCO and is currently recording with the LA All Star Brass Band. Outside of horn, she loves to travel and enjoys spending time with her dog Dakota.

Matthew Dutczak is a bassoonist and conductor holding degrees from UW-Milwaukee and University of Illinois. He has studied conducting with Dr. John Climer (UWM), and Dr. José O. Riojas and Javier Mendoza (UIC). His bassoon teachers include John Gaudette (UIC) and Beth Giocobassi (UWM). Matthew actively performed in chamber ensembles, bands, and orchestras at UIC and held the position of UIC Pep Band Game Management Apprentice in which he assisted the organization and performance of the UIC Pep Band. He was also a member of the UIC Band Staff for four years and was Logistics Manager for one year. At UWM, Matthew served as Band Office Manager where he worked closely with Dr. John Climer and the UWM Wind Ensemble as well as Professor Margery Deutsch and the University Community Orchestra.

György Ligeti (1923-2006) was a Hungarian-Austrian composer known for his avant-garde style, which earned him popularity during his lifetime. So much so that his compositions were used in Stanley Kubrik’s 1968 film 2001: A Space Odyssey.

Ligeti’s Sechs Bagatellen (Six Bagatelles) was written in 1953 and is an arrangement Ligeti himself made based on his piano work, Musica Ricercata. These short yet powerful pieces display a variety of textures, tone colors, and musical effects.

The first bagatelle, Allegro con spirito, is comprised of only four pitches, yet has impactful and memorable melodies. This is contrasted immediately by the second bagatelle, Rubato-Lamentoso. This movement begins with an eerie oboe solo, followed by sounds of anguish, achieved through dissonance and changes in texture throughout the ensemble. Presto ruvito, the fourth bagatelle, is written in memory of Béla Bartók, a fellow Hungarian composer who had a strong influence on Ligeti’s earlier works. The piece ends with a furious movement that ultimately dissolves into the last note.

William Grant Still (1895-1978) was a prominent American composer and conductor during the 20th century. He is best known for his Afro-American Symphony (1931) as well as being the first African-American conductor to conduct a major orchestra in the United States.

Grant Still’s Miniatures for wind quintet were originally written for flute, oboe and piano trio in 1948. The work was then arranged for wind quintet in 1963. Each movement is inspired by the musical traditions of Mexico, Peru and the United States, some tunes dating back over a century. The following descriptions come directly from the music itself and paint a picture of the story being told through the music.

Aires Tropicales was commissioned by the Aspen Wind Quintet and composed in 1994 by Cuban-American musician, composer, and arranger, Paquito D’Rivera. The piece is full of Afro-Cuban and Afro-Caribbean rhythms and melodies that are a reflection D’Rivera’s background. The first movement of the piece begins with the clarinet playing a Son Cubano melody, which leads into the Son rhythm that animates the bassline of the next movement. Throughout much of this movement, the listener will hear a recurring ostinato pattern played in the lower voices, which underscore this Afro-Cuban rhythm and support the melodic lines. The third movement, entitled Habanera, is a reed trio that takes inspiration from the works of French Impressionist composer, Maurice Ravel. This movement contains many expressive melodic lines interwoven in the instrumentation. In addition, D’Rivera also includes in the texture subtle quotes from Dizzy Gillespie’s A Night in Tunisia. Vals Venezolano is a lively Venezuelan waltz that features several dance melodies passed between instruments. The fifth movement is an homage to Dizzy Gillespie, who D’Rivera cites as one of his greatest musical influences. Rich jazz harmonies are emphasized using dramatic changes in dynamics. The latter half of the movement takes direct quotes from Gillespie’s A Night in Tunisia, and uses a nearly identical harmonic framework as the original tune. Contradanza is a Cuban dance that uses the same Son rhythm used in the first two movements. The melody is inspired the song La Comparsa by Cuban composer, Ernesto Lecuona. The final movement, entitled Afro, begins with a melody played by the alto flute, and later in unison with the rest of the group. This is followed by an energetic rhythmic dance in 6/8 meter played over an Afro-Cuban ostinato.