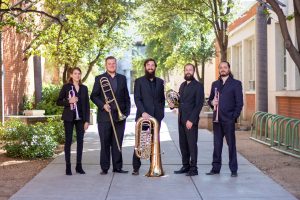 Trumpeter Rachel Clemmer is a second-year Master’s student in Music Performance and a Graduate Teaching Assistant at the University of Arizona Fred Fox School of Music. An active freelancer, Rachel has performed with various ensembles in Southern Arizona including the Tucson Symphony Orchestra Brass Quintet, True Concord Orchestra & Voices, and the Tucson Pops Orchestra. In August 2016, she performed as a band member with artist Adele during her tour, “Adele Live 2016,” in Phoenix, Arizona. Her summer festival work has included the Interlochen Center for the Arts, the Summer Brass Institute and Festival, and Eastern Music Festival. Rachel’s career has also included arts administration for the Tucson Symphony Orchestra from 2015-2018, where she served as the Community Engagement Programs Manager. Rachel earned her Bachelor’s Degree in Music Performance from the Blair School of Music at Vanderbilt University. Her principal teachers have included Betsy Bright-Morgan, Allan Cox, Katie Miller, and currently, Prof. Jason Carder.

Paulo Sprovieri began his studies in trumpet at the age of 10 in Sao Carlos, Brazil, in his school’s marching band, which won many local and national prizes. Seven years later he began his lessons with the renowned professor Clovis Beltrami at the State University of Campinas. During the period at the university Paulo had a prolific student life, playing with UNICAMP Youth Orchestra, UNICAMP Symphony Orchestra and the undergraduate brass quintet. He also had the opportunity to attend many festivals and master classes with great trumpet players like Charles Schlueter, Frederic Mills, Steven Trinkle, Ole Edvard Antonsen, Reinhold Friedrich, Edgar Batista dos Santos, Nailson Simoes and Heinz Schwebel. After graduating in 2005 he started his career as a freelance musician in Sao Paulo playing with many orchestras, as Sao Paulo University Chamber Orchestra and Campinas Symphony Orchestra, as well as many freelance jobs. His experiences abroad include two music festivals in Europe, studying with influential trumpet pedagogues including Eric Aubier and Pierre Dutot. Holding a Master’s in performance from the University of Akron, Paulo is currently pursuing his DMA in music performance at the University of Arizona Fred Fox School of Music under the tutelage of Prof. Jason Carder.

Michael Mesner is a third year Doctor of Musical Arts student in horn performance at the University of Arizona Fred Fox School of music studying under Prof. Johanna Lundy. Previously, Michael attended Eastern Michigan University where he studied with Dr. Denise Root-Pierce. After earning a Bachelor of Music Education, Mr. Mesner completed a Master of Music in horn performance, studying with Professor Daniel Katzen. After taking time off to pursue a freelance career in southeastern Michigan, where he was Principal Horn of the Rochester Symphony, and a regular performing member of several other orchestras, Michael has returned to the Fred Fox School of music to serve as a studio Graduate Assistant and perform with the Fred Fox Graduate Brass Quintet.

Trombonist Alex Hunter— a native of Keizer, Oregon— is currently pursuing his Master of Music degree in Trombone Performance at the University of Arizona, under Professor Moisés Paiewonsky. Since moving to Tucson, Alex has had the privilege of performing with the UA Wind Ensemble, Arizona Symphony Orchestra, Fred Fox Graduate Brass Quintet, Tucson Trombone Collective, Southern Arizona Symphony Orchestra, and the Tucson Pops Orchestra. Before attending U of A, Alex received his Bachelor of Music degree in Trombone Performance from the University of Utah. While living in Salt Lake City, he performed in the University of Utah Wind Ensemble and University of Utah Philharmonia as principal trombone. Alex also played with the Salt Lake City Jazz Orchestra and University of Utah Jazz Ensemble, playing lead trombone all four years of his attendance at the school. Throughout his career, Alex has had the privilege of performing in masterclasses with Peter Elefson, Demondrae Thurman, and Henry Henniger, as well as members of Dallas Brass and the Utah Symphony Orchestra. Alex also performed in the Portland Jazz Festival and the Next Generation Jazz Festival hosted by the Monterey Jazz Festival. For the last two summers, Alex has held a fellowship position at the Fredericksburg Brass Institute in Fredericksburg, Virginia. His trombone studies began in fifth grade, and his main mentors include Matt Polacek, Stan Bock, Donn Schaefer, Mark Davidson, and Moisés Paiewonsky.

Tubist William Hammer is a doctoral student at University of Arizona under the instruction of Dr. Matt Tropman, and he is a well-established chamber musician in addition to being an avid freelancer. He is currently a member of Boreas Quartet and Backburner! With these groups, he has been a guest artist all around the United States for various International/Regional Tuba Euphonium Conferences and Texas Music Educators Association. While living in Pittsburgh, he was also a member of a local brass ensemble known as Brass Roots. On top of live performance, William has been featured on four studio-recorded CD’s in a chamber setting. He has also advanced or placed at various competitions such as International/Regional Tuba Euphonium Conference chamber competitions, mock orchestral auditions, the Leonard Falcone Festival, and finalist for concerto competitions at both Carnegie Mellon University and University of Memphis. William’s educational background includes a Performer’s Certificate from University of Denver, Master’s Degree from Carnegie Mellon University, and a Bachelor’s Degree from University of Memphis. His teachers include Warren Deck, Kathleen Brantigan, Craig Knox, and Dr. Kevin Sanders. 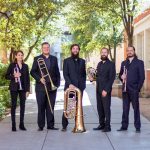 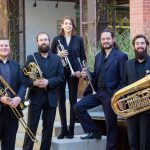