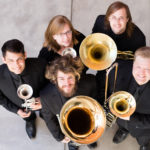 The University of Arizona Fred Fox School of Music presents the UA Fred Fox Graduate Brass Quintet in concert. The free-admission performance will be held on Sunday, April 22, 2018 at 7:30 p.m. in Holsclaw Hall.

Theresa Bickler, a Rugby, North Dakota native, is in her first year at the University of Arizona Fred Fox School of Music pursuing a Master of Music degree in trumpet performance under the tutelage of Professor Ryan Darke. Her other primary teachers include Tilman Hovland and Dennis Gowen. Theresa graduated from the University of Mary in 2014 with a Bachelor of Music degree in trumpet performance. During her studies there, she was actively involved in many music ensembles, including concert band, concert choir, jazz band, vocal jazz, chamber brass ensembles, vocal arts and steel band. Since then, she has had the opportunity to play principal trumpet in the Missouri Valley Chamber Orchestra and the Bismarck MandannSymphony Orchestra. In 2015, she cofounded the brass quartet Symbiotic Tendencies, which has performed a variety of concerts in North Dakota. As a soloist, Theresa has been featured with the Minot Brass Band, University of Mary Concert Band and the Missouri Valley Chamber Orchestra.

Michael Mesner is a first-year Doctor of Musical Arts degree student in horn performance at the University of Arizona Fred Fox School of Music. Previously, Michael attended Eastern Michigan University where he studied with Dr. Denise Root-Pierce. After earning a Bachelor of Music Education degree, Mr. Mesner completed a Master of Music degree in horn performance, studying with Professor Daniel Katzen. After taking time off of school to pursue a freelance career in southeastern Michigan, where he was principal horn of the Rochester Symphony, and a regular performing member of over five other orchestras, Michael has returned to the Fred Fox School of Music to serve as a studio graduate assistant and to perform with the Fred Fox Graduate Brass Quintet.

Jordan Robison is currently pursuing a Doctor of Musical Arts degree in trombone performance at the University of Arizona Fred Fox School of Music. In addition to performing with the Fred Fox Graduate Brass Quintet, he serves as a graduate assistant for the studio of Professor Moisés Paiewonsky. His duties include teaching private lessons, conducting the undergraduate trombone choir, coaching chamber music, and assisting with weekly studio classes and brass methods. Jordan holds a Master of Music degree and a Professional Performance certificate from the Lynn University Conservatory of Music in Boca Raton, Florida, as well as a Bachelor of Music degree from the University of Redlands at his hometown in Southern California. Performing coast to coast, he has appeared with the Florida Grand Opera, Palm Beach Opera, Palm Beach Symphony Orchestra, Symphony of the Americas, Florida Sunshine Pops Orchestra, Redlands Symphony Orchestra, and the Coachella Valley Symphony, among others.  Jordan currently enjoys a position with the Sierra Vista Symphony Orchestra and has recently performed with the Tucson Symphony Orchestra, Tucson Masterworks Chorale and the Tucson Trombone Collective. He has also appeared in pit orchestras for the Arizona Theatre Company, Arizona Repertory Theatre and Christian Youth Theater. Jordan is a member of Phi Mu Alpha Sinfonia, a national music fraternity that exists to inspire the betterment of mankind and support music in local communities through service, brotherhood and performance.

Guy Manning is pursuing his Master of Music degree in tuba performance at the University of Arizona Fred Fox School of Music, where he studies with Dr. Matthew Tropman. Born and raised in Miami, Florida, Guy was exposed to rich and varied musical culture for as long as he can remember. A large part of his upbringing was focused on mathematics and science, which have continued to influence his technical and musical approach to the tuba and his other musical endeavors. Guy has studied under Sam Pilafian, Velvet Brown, and most recently under Dr. Aaron Tindall at the University of Miami, where he received his Bachelor of Music degree in tuba performance. In addition to his duties with the Fred Fox Graduate Brass Quintet, Guy performs with the University of Arizona Wind Ensemble and also served as principal tubist in the Arizona Symphony Orchestra. 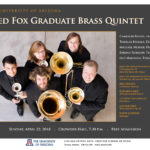