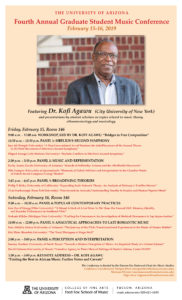 The Fred Fox School of Music at the University of Arizona presents its Fourth Annual Graduate Student Music Conference. It will take place on Friday and Saturday, February 15 and 16, 2019. This student-run conference will feature presentations by student scholars from around the country on topics related to music theory and musicology.

The featured guest is Dr. Kofi Agawu who will present the keynote address, titled “Finding the Beat in African Music: Further Notes and Caveats.” Dr. Agawu will also lead a student workshop titled “Bridges to Free Composition,” which builds on his book “Music as Discourse: Semiotic Adventures in Romantic Music.” In addition, the conference will feature ten presentations by student scholars from around the country on topics related to contemporary musicology, music education, and music theory. All events will take place in Room 146 of the Fred Fox School of Music

The Conference is funded by the Daveen Fox Endowed Chair for Music Studies.

“A Non-Conventional Act of Heroism: the (mis)Placement of the Second Theme in the First Movement of Sibelius’s Second Symphony”

“Sounds of Solidarity: Arizona and the #RedForEd Movement”

“Elements of Uzbek Folklore and Interpretation in the Chamber Music

“It Meant A Heck of A Lot More To Me Than The Funeral Did: Memory, Identity, and Karaoke Performance in Southeast Ohio”

“Crafting the Consonance: An Investigation of Metrical Dissonance in Tap Improvisation”

Faez Abdalla Abarca (University of Arizona):“The Journey of the Pitch: Transformational Experiences in the Music of Gustav Mahler”

“The Tonal Dialogues of Hugo Wolf”

“Towards a Historic Perception of Music: An Empirical Study of a Galant Schema”

“Finding the Beat in African Music: Further Notes and Caveats”

Kofi Agawu was born in Ghana, where he received his initial education before studying composition and analysis in the UK and musicology in the US. He has taught at Haverford College, King’s College London, Cornell, Yale and Harvard; held visiting positions at the University of Hong Kong, Indiana University, University of Toronto, the University of Pavia, Cremona, and Oxford University; and lectured at numerous universities and conferences around the world. In 2012-13, he was appointed George Eastman Visiting Professor at Oxford University, becoming only the second music scholar to have held that position since its endowment in 1930. He has served on the editorial boards of leading journals in musicology, music theory, African music and ethnomusicology, and on several fellowship panels.

Agawu’s work is widely discussed and frequently cited for its interrogative quality. Tony Lewis remarks on Agawu’s role in “recasting African music as a musicological rather than ethnomusicological topic”; Veit Erlmann wrote that Representing African Music (2003) is “without any doubt the most powerful intervention in African musicology in a decade or more . . . one of the most edgy and stylish pieces of writing on the politics of culture in postcolonial Africa to have appeared of late”; and Music as Discourse (2008) elicited the following from Raymond Monelle: “The painstaking clarity of the analyses will surely be imitated by a generation of bright students . . . radical and challenging . . . easy to absorb yet infinitely sophisticated . . . elegant and rich . . . needs to be lived with and digested.”