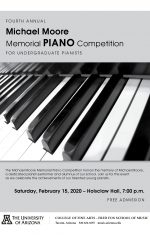 The Michael Moore Memorial Piano Competition honors the memory of Michael Moore,
a dedicated pianist-performer and alumnus of our school. Our undergraduate piano students
will compete for over $4,000 in prize awards.

Yaowen Mei is a freshman piano performance major at the University of Arizona Fred Fox School of Music, where he studies with Dr. Daniel Linder and Dr. John Milbauer as a recipient of the Lotte C. Reyersbach Scholarship. Before moving to Tucson, he earned the Professional Studies Diploma Degree from the San Francisco Conservatory of Music, where he studied with Yoshikazu Nagai. Yaowen grew up in Huaihua, Hunan Province, China. He began piano studies at the age of eight and only two years later won first prize in the Golden Melody Piano competition in Huaihua City. Shortly thereafter, he entered the Wuhan Conservatory of Music, where he studied with Fang Kuang and Dr. Hong Xu. Among his numerous accolades are prizes in the Fulixi Piano Competition (2011), the Yamaha Music Scholarship Piano Competition at the Wuhan Conservatory (2013, 2014), the Eastman Young Artists Piano Competition (2016), and most recently, the University
of Arizona Concerto Competition (2019).

Joey Tranvik is a junior seeking a Bachelor of Music degree in piano performance at the University of Arizona in the studio of Dr. Daniel Linder. Joey transferred from the University of Northwestern in St. Paul, Minnesota. He has attended the Young Artist World Piano Festival for ten years starting at age nine, has received prizes, and participated in master classes at the festival. He was a featured young artist in the Lakes Area Music Festival in 2016-2017 after winning the Heartland Symphony Orchestra Concerto Competition. At the University of Arizona, he won first prize in a composition competition, creating the official music featured in the university’s PAC-12 TV commercial, and was also a prizewinner in the 2019 Michael Moore Piano Competition. Outside of school, Joey enjoys composing, recording, and producing music.

Daniel Karger-Peñalosa is a fourth-year piano performance major under the instruction of Dr. Nino Bakradze. His previous instructors include Dr. Rex Woods, Dr. Alexander Tentser and Prof. Tannis Gibson. Daniel’s achievements since studying at the University of Arizona include winning second place in the 2018 Michael Moore Competition and third place in the 2017 Michael Moore Piano Competition. His hobbies outside of music include learning languages, such as Japanese and Chinese, with hopes of teaching English abroad in Asia after graduating. He is expected to graduate this May with a Bachelor of Music degree in piano performance and a minor in Japanese.

Ivan W. Yang began piano lessons with Mrs. Natalya Thran at the age of six. Under the guidance of Mrs. Thran, he has won several piano competitions sponsored by East Valley Music Teachers Association in Arizona. Ivan also had the opportunity to attend the 2014 Arizona Summer Piano Institute and study under Dr. Nelita True as well as professors Norman Krieger and Eckart Sellheim. In 2018, Ivan and his duet partner, Toya Liu, represented Arizona in the MTNA Southwest Regional Piano Duet Competition and received Honorable Mention. During his time at Campo Verde High School, Ivan sang in the school choir, and frequently provided piano accompaniment for his fellow musicians. He was awarded for accompanying the choir in the 2016 WorldStrides Onstage Festival at Anaheim, California. Ivan is studying piano performance at the University of Arizona with Dr. Nino Bakradze. In the spring of 2019, he won second prize in the Michael Moore Piano Competition. Although unsure of his career, Ivan hopes to continually serve his church and community while strengthening his passion for music.

Debbie Osborn grew up in a musical family. Debbie’s mother, a homemaker, insisted that the children all have music lessons. Her father, a Spanish teacher, obligingly opened a moonlighting handyman business in order to pay for those lessons. Debbie studied piano for nine years with Mary Beth Bleak Thompson, and took organ classes with her during summer breaks. When Debbie graduated from high school in 1974, Ms. Thompson told her to go study with Alex Molnar at Fresno City College in Fresno, California. Debbie obediently did so, and in 1979 Debbie graduated from Fresno City College with an Associate Degree in nursing and an Associate Degree in music. She then married and traveled the world with her Air Force husband, raising a family along the way. In 1994 they settled in San Antonio, Texas, where Debbie worked as a nurse and a freelance accompanist, and filled the post of accompanist for Holy Trinity Presbyterian Church for twenty years. In 2014 they moved to Tucson, Arizona, where Debbie is now fulfilling her lifelong dream of working toward a Bachelor of Music degree in piano performance at the University of Arizona, studying with Dr. Rex Woods
and Dr. Nino Bakradze.