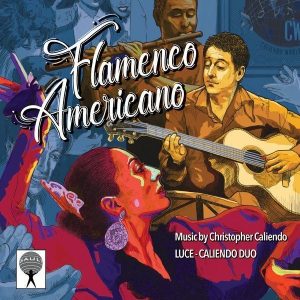 Emmy-nominated composer and guitarist Christopher Caliendo joins faculty artist Brian Luce for this concert of works from their 2019 album.

Brian Luce is the Professor of Flute at the University of Arizona and a Yamaha Performing Artist. He performs in the Arizona Wind Quintet and Luce-Caliendo Duo. Dr. Luce has performed as principal flute of the Champaign-Urbana, Midland-Odessa, and Johnstown symphony orchestras and has performed with the Dallas Chamber Orchestra, Dallas Bach Society, Dallas Wind Symphony, Abilene Philharmonic, Keystone Wind Ensemble, and the Tucson Chamber Orchestra. As a soloist, he has performed throughout the U.S., Europe, Korea, Japan, and China and has performed concertos with orchestras in the U.S. and the Republic of Korea. He has been featured at music festivals sponsored by the National Flute Association, British Flute Society, Shanghai International Exposition, Soka International Harp Festival, Texas Flute Society, Florida Flute Association, Mid-South Flute Society, Las Vegas Flute Club, Albuquerque Flute Association, Flute Society of St. Louis, Arizona Flute Society, and Tucson Flute Club. His performances have been broadcast throughout the U.S. and his recordings are recommended references by music education associations including the ABRSM.

Acclaimed as “an authoritative soloist,” his Albany Records SACD, Music of the Superpowers: Sputnik, Spies, and the Space Race, has been lauded by The American Record Guide: “This release should be of particular interest for the less known, seldom recorded Denisov and Smirnova, though everything on it is enjoyable from beginning to end. Brian Luce plays with flair and intelligence…” He also made the premiere recording of Anthony Plog’s Concerto for Flute and Wind Ensemble. His release with Carrol McLaughlin, Allume, includes numerous premiere recordings of original works and transcriptions for flute and harp. He has recorded for the Naxos, Albany, Toccata Classics, Gault, and Citadel labels.

He has given recitals and master classes throughout the U.S., Europe, Korea, and Mexico. Editions BIM and IntegrityInk publish his compositions, arrangements, and realizations. His performance and pedagogy articles have appeared in Flute Talk Magazine, and his dissertation on Edison Denisov, earned the 2001 Morgan Outstanding Dissertation Award from the University of North Texas.

As an Arizona native and avid outdoorsman, Brian enjoys trekking afield the beautiful alpine regions of the state with his family. He coaches youth baseball and softball for Little League and serves as an executive board member.

As a composer, Caliendo is considered a “best bet” by the Los Angeles Times, with more than 400 published theatrical works, many of which are standards in today’s repertoire and several have been chosen as subjects for dissertations for Doctoral students. As a self-publisher, Caliendo has won numerous honors, including 10-time winner of the National Flute Association’s Newly Published Sheet Music Award.

As a composer for film and television, Caliendo’s accomplishments include the 20th Century Fox-commissioned soundtrack to John Ford’s 1924 silent film The Iron Horse. Called an “excellent orchestral score” by New York Times film critic Dave Kehr, the 136-minute original work was featured at 20th Century Fox’s 75th anniversary celebration in 2010, where selections were performed by the Los Angeles Philharmonic, along with music from Alfred Newman, David Raskin, Jerry Goldsmith, John Williams and Rodgers and Hammerstein at the Hollywood Bowl. Caliendo won the National Society of Film Critics 2007 Film Heritage Award for his work on The Iron Horse. He won the award again in 2008 for composing original scores for movies featured on 20th Century Fox Home Entertainment’s Murnau, Borzage and Fox DVD box set. Caliendo was also commissioned by Sony Pictures to compose a new score for the 2005 re-release of Sam Peckinpah’s 1965 feature Major Dundee, which earned him the honor of being the first composer in film history to re-score a major motion picture. Film critic Leonard Maltin declared the score “A great victory!” while Grover Crisp of Sony Pictures said “[The score] is in the vein of Jerry Goldsmith or Elmer Bernstein or Alex North scores for similar pictures: Big where it needs to be, intimate where it needs to be, but really full-bodied and complex, fitting its subject perfectly.”

Caliendo has also written music for the documentary Life Is Love, which premiered at the Cinequest Film Festival, and for the TV series’ Dallas, Knot’s Landing and Paradise, for which he received an Emmy nomination in 1988. Most recently, Caliendo scored Lee and Pamela, the life of Lee and Pamela Marvin for 20th Century Fox and is currently working on a multi-media production of Billy Tucci’s landmark comic-book, Shi.

As a concert guitarist, Keith Hannaleck of Gramophone magazine has described Caliendo as “one fantastic guitar player…simply masterful and as fluid as humanly possible…[one] of the best musicians in the world.” He has performed with many Hollywood luminaries, including Larry King, Linda Hamilton, Ron Perlman, The Manhattan Transfer and Walter Koenig, and was selected by Bob Hope to be the featured performer for his 90th birthday celebration. He is also a recording artist for major film studios on movie soundtracks and currently tours his world music with the Luce-Caliendo Duo and Caliendo Trio. Caliendo is endorsed by Kevin Ryan guitars, performing on the model “The Mission Grand,” and has numerous CD recordings.

Christopher serves as a juror for the Irish Film & Television Academy Awards, lives in San Dimas, California and spends his favorite moments with wife, Dr. Kristin Caliendo and his son, Christian Paul.