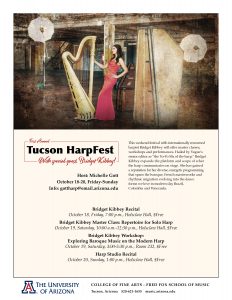 This weekend festival with internationally renowned harpist Bridget Kibbey will offer master classes, workshops and performances. Hailed by Vogue’s senior editor as “the Yo-Yo Ma of the harp,” Bridget Kibbey expands the platform and scope of what the harp communicates on stage. She has gained a reputation for her diverse, energetic programming that spans the baroque, French masterworks and rhythmic migration evolving into the dance forms we love in modern-day Brazil, Colombia and Venezuela.

Called the “Yo-Yo Ma of the harp,” by Vogue’s Senior Editor Corey Seymour, Bridget Kibbey expands the platform and scope of what the harp communicates on stage, via her own touring projects.

As a result, Kibbey has fast gained a reputation for her diverse, energetic programming that spans the baroque, French Masterworks, and rhythmic migration evolving into the dance forms we love in modern-day Brazil, Colombia, and Venezuela.

2019/2020 highlights include J.S. Bach’s keyboard concerti alongside the Dover Quartet in the US and Canada, a ten-city duo collaboration with mandolinist Avi Avital, four world-premiere performances of the João Luiz Harp Concerto -exploring the evolution of Brazilian popular dance forms on the harp.

Kibbey is a winner of a prestigious Avery Fisher Career Grant, a Salon de Virtuosi SONY Recording Grant, the only harpist to win a place in the Chamber Music Society of Lincoln Center’s Bowers Program, Premiere Prix at the Journées de les Harpes Competition in Arles, France, and winner of Concert Artists Guild Competition and the Juilliard School Peter Mennin Prize for Artistic Excellence and Leadership.

She has toured and recorded with luminaries Placido Domingo, Dawn Upshaw, and Gustavo Santaollalo for SONY Records and Deutsche Grammaphon; and, her own debut album, Love is Come Again, was named one of the Top Ten Releases by Time Out New York.

Ms. Kibbey’s solo performances have been broadcast on NPR’s Performance Today, New York’s WQXR, WNYC’s Soundcheck, WETA’s Front Row Washington, WRTI’s Crossover, and on television in A&E’s Breakfast with the Arts.  Most recently Bridget was named “Best in Studio 2018” by WQXR for her performance of her own adaptation of J.S. Bach’s Toccata and Fugue, live on air. 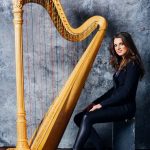 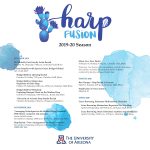