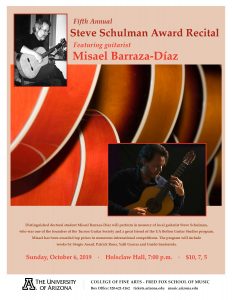 Distinguished doctoral student Misael Barraza Díaz will perform in memory of local guitarist Steve Schulman, who was one of the founders of the Tucson Guitar Society and a great friend of the UA Bolton Guitar Studies Program. Misael has been awarded top prizes in numerous international competitions.

“The Road of Hope (Episodic Variations)”

The artist has been presented as a solo guitarist throughout the United States, Mexico, Canada and Europe. In Alicante, Spain, he was featured at Gala Importantes, one of the foremost journalistic events of the region. He was also invited to perform at the first Día de la Guitarra Española en Alicante, a special event in which Manuel Barrueco, Ignacio Rodes, Edmon Colomer and Christian Haimel where also featured. Misael was recently presented as part of the concert series of the Danish Guitar Society, performing at one of its most important and historical venues, the Rundetaarn Tower. He was also the featured solo guitarist for the world premiere of “Passionately, Piazzolla!” the musical, a collaboration between Tucson Desert Song Festival, Ballet Tucson, and the Tucson Guitar Society. Mr. Barraza has been featured three times as a guest artist at the Science Lecture Series that takes place at the University of Arizona every year.

Mr. Barraza has been the recipient of numerous honors and awards for his trajectory in music during his stay at the University of Arizona, including the Creative Achievment Award (2018), Steve Schulman Award (2015, 2016, 2018, 2019), Northern Trust Distinguished Graduate Student Award (2015), Honors Research Grant (2011), and the Medici Scholars Award (2010, 2011, 2012, 2018). In addition, Misael has been awarded first place at all five in-house competitions a the Bolton Guitar studies program: Beeston Guitar Competition, Sholin Guitar Competition, Schaeffer Guitar Competition, and Wolfe Award Recital. Mr. Barraza has also twice been the recipient of the prestigious David Russell Bach Prize, a special competition held at the University of Arizona in honor of David Russell and dedicated solely to the music of J.S. Bach.

Music had been an integral part of Steve’s life since he was a child. Born in Tucson, Steve started playing the guitar at age ten, and by the time he was a junior at Rincon High School he was playing in bands. Steve continued to play in bands or solo to pay his way through college. He graduated the University of Arizona in 1972 with a degree in education and  later returned to earn a master’s degree in education and administration.

Steve’s growing interest in education did not overshadow his desire to share his love of music, especially the guitar. His talents in both areas became his passions along with his family and good food and wine. These truly defined him. Steve was given the gift of music and in turn he gave that gift to countless students he taught and young people he mentored. Steve taught for more than 35 years in the Tucson Unified School District (TUSD), reaching children when he thought they were most receptive to learning. Steve was a member of the first gifted education teaching team for elementary students. He also worked as a music resource teacher and as a member of the TUSD Arts Team.

Steve was a highly accomplished classical and flamenco guitarist and one of the founders of the Tucson Guitar Society. His service as a member of the University of Arizona College of Fine Arts School of Music Advisory Board was important to him in order to provide more opportunities for gifted student musicians. Steve continued to play in local bands throughout his life in a variety genres, from the Temple Emanu-El Avanim Rock Band, which put  traditional Jewish liturgical music to  rock and roll themes to country western. After retiring from TUSD, Steve worked at The Folk Shop, sometimes selling a guitar by giving free lessons. He just couldn’t stop teaching or playing.

For additional information about the Fred Fox School of Music Guitar Studio, contact