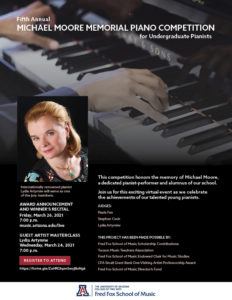 This competition honors the memory of Michael Moore, a dedicated pianist-performer and alumnus of our school. Join us for this exciting virtual event as we celebrate the achievements of our talented young pianists.

This project has been made possible by:

Solo recital tours have taken her to all major American cities and to
important European music centers, and throughout the Far East. She
has performed in England, Scotland, Ireland, Germany, France, Italy,
Switzerland, Belgium, Ukraine, Estonia, Finland, and Poland, as well
as in China, Singapore, New Zealand, Taiwan, Hong Kong, and
South Korea.

Critics have acclaimed her seven solo recordings for the Chandos
label, and she has also recorded for Bridge, Centaur, and Naxos. Her
debut Chandos “Variations” CD won Gramophone Magazine’s “Best
of the Year” award, and her Tchaikovsky Seasons CD sold over
25,000 copies. Her festival appearances include Aspen, Bantry
(Ireland), Bay Chamber, Bravo! Vail Valley, Caramoor, Chamber
Music Northwest, Foulger, SaltBay, Chautauqua, Grand Canyon,
Hollywood Bowl, Marlboro, Meadowmount, Montréal, Mostly Mozart,
Seattle, and Tucson. Her newest CD of “The Complete Cello and
Piano Works by Felix Mendelssohn” with cellist Marcy Rosen for the
Bridge label was nominated for the 2019 “Grammy” Award.
An acclaimed chamber musician, Artymiw has collaborated with such
celebrated artists as Yo-Yo Ma, Richard Stoltzman, Arnold
Steinhardt, Michael Tree, Kim Kashkashian, Samuel Rhodes, Marcy
Rosen, John Aler, Benita Valente, and the Guarneri, Tokyo,
American, Alexander, Borromeo, Daedalus, Miami, Orion, and
Shanghai Quartets, and has toured nationally with Music from
Marlboro groups. A recipient of top prizes in the 1976 Leventritt and
the 1978 Leeds International Competitions, she graduated from
Philadelphia’s University of the Arts and studied with distinguished
concert pianist and former Director of the Curtis Institute of Music,
Gary Graffman, for twelve years. The University of the Arts honored
Artymiw with a “Distinguished Alumna” Award in 1991.
In 2020, Artymiw was invited to be a juror for the First China
International Piano Competition in Beijing. In conjunction with this
event, the Central Conservatory of Beijing awarded Artymiw an
honorary professorship from 2019-2022. In 2017, Artymiw was on the
jury for the 2nd Lang Lang International Futian Piano Competition in
Shenzhen, China, as well as on the jury for the first Van Cliburn
Junior International Piano Competition in Fort Worth, TX in 2015. She
has also been on the juries for fourteen piano concerto competitions
at the Juilliard and Manhattan Schools in New York. She has been a
frequent guest piano teacher at Juilliard since 2015, presented
master classes at both Juilliard and the Curtis Institute in Philadelphia
in 2016, and will present a master class for the Manhattan School in
April 2021.

Artymiw is Emerita Distinguished McKnight Professor of Piano at the
University of Minnesota in Minneapolis where she taught from 1989-
2020. For more information, please visit her website at
lydiaartymiw.com.