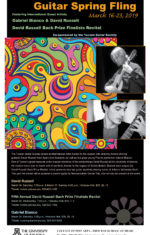 The Annual David Russell Bach Prize Finalists Recital features four student finalists in this highly competitive competition. (The semifinal round of this competition is taking place on Wednesday, March 13 at 7:00 p.m. in Holsclaw Hall, and this portion of the competition is free admission, open to the public.)

Grammy Award-winning guitarist David Russell is the sole judge of the four finalists. In May 2014 Maestro Russell was bestowed the Honorary Doctoral Degree from the University of Arizona. About this competition, Russell wrote, “The wonderful music of J.S. Bach is satisfying on all levels: emotionally, intellectually, technically and historically. It has given me so much pleasure and happiness all through my life, that I want to encourage all the students to dedicate some valuable time of their important formative years at the university to studying his music. The competition will be a very good incentive for them to include some of Bach’s works in their repertoire that I hope will give them the same pleasure for their entire lives.”  Past winners of this competition are: 2015 Misael Barraza; 2016 Bin Hu; 2017 Nicholas Epple; 2018 Misael Barraza