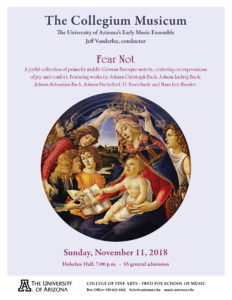 Jeff Vanderlee is a second-year doctoral student in choral conducting with a minor in orchestral conducting under the mentorship of Dr. Bruce Chamberlain, Dr. Elizabeth Schauer and Dr. Thomas Cockrell. The 2018-2019 academic year marks Jeff’s second year as director of Collegium Musicum. He is an active and diverse musician, performing with the Arizona Choir and Arizona Baroque, as well as accompanying with various high school and community groups across the Tucson area. Jeff also serves as choral director at the Good Shepherd United Church of Christ in Sahuarita, Arizona.

Throughout his schooling and teaching career, Jeff has had a special connection with and affinity for early music. Performing in the Bach Cantata Project at the Butler School of Music, the Texas Early Music Project, and Ensemble Settecento, provided him with formative experiences, and ignited within him a passion for performing and teaching music of the Baroque and Renaissance.

STUDENT NIGHT at the OPERA

UA Opera Theatre Presents Student Night at the Opera, an evening dedicated to students and the best place to mingle with fellow opera lovers! This one-night-only, special event will feature a performance of Aaron Copland’s The Tender Land, fully staged with orchestra, as well as a Pre-Show Talk with UA faculty about our production and the music of Copland. Admission to Student Night is free.
For tickets or more information, please contact Cynthia Stokes cynthiastokes@arizona.edu.

Aaron Copland’s The Tender Land is a compelling coming-of-age story set in a rural Midwest town during The Great Depression. Laurie, a young woman on the eve of her high school graduation, must contend with the expectations of family and society while navigating first love and the gravity of pursuing one’s own path. The Tender Land continues to touch contemporary audiences with an unbridled authenticity that truly captures the American spirit. The Tender Land will be performed with a live orchestra.

AZ CornoCon is a day devoted to the world’s greatest instrument…the French horn! College, high school, and middle school horn players are invited to join us in person for this FREE event. Everyone is welcome to join in on the livestream! The day includes a variety of fun activities: “Drop the Beat” group warmup, guest artist and host performance, lunch, masterclasses, horn choir rehearsal and a final mass horn choir performance (outside) open to friends and family to attend! This year’s guests, Lanette Compton and Carolyn Sturm are inspiring horn players and teachers. Prof. Compton teaches at Oklahoma State University and is known for her “Drop the Beat” Warmup. Ms. Sturm is a highly sought-after private teacher in Tucson, and a former member of the Frankfurt Opera in Germany.


Arizona Wind Quintet marks the 100th anniversary of this voting rights milestone with a retrospective of compositions by American women. Biographical vignettes accompany each short movement, as we feature a powerful cast of pioneering women from the early 20th century: Marion Bauer, Amy Beach, Johanna Beyer, Ruth Crawford Seeger, Mary Howe and Elinor Remick Warren. These musical gems, some rarely performed and unearthed from archival sources, are juxtaposed with an exciting new work, "Soul on Fire," by UA faculty composer Dr. Yuanyuan (Kay) He, commissioned by AWQ for this occasion. Closing the program is music by the extraordinary composer Valerie Coleman, whose "Portraits of Josephine" suite is inspired by the life of Josephine Baker. The struggles Baker experienced parallel that of women of color to gain access to the ballot box. A full consideration of the history of women’s voting rights must acknowledge the ways BIPOC women were marginalized from the suffrage movement and the benefits of the 19th Amendment for decades beyond its ratification in 1920. Join us for this musical celebration of ingenuity, self-expression, boldness, and persistence. ... See MoreSee Less