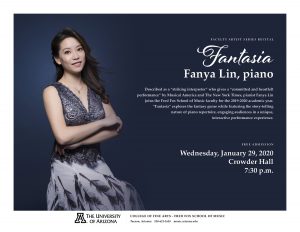 Described as a “striking interpreter” who gives a “committed and heartfelt performance” by Musical America and The New York Times, pianist Fanya Lin has captivated audiences worldwide with her charismatic and gripping performances. Her orchestral appearances include the Toruń Symphony Orchestra, Utah Symphony, Savannah Philharmonic, Grand Junction Symphony, and Aurora Symphony. Fanya’s performance of Prokofiev Piano Concerto No. 3 with the Royal Philharmonic Orchestra was depicted as “mesmerizing performance, it appeared as though a tornado had touched down through her [Fanya Lin] body and lifted her, feathers fluttering, from the piano stool as she weighed into the keys” by Hastings Times and Festival Flyer.

An avid soloist, Fanya promotes classical music to the general public by creating innovative concert programs and engages her audience by presenting interactive performances. Her solo recitals have been featured in numerous prestigious concert series, including the Schubert Club Musicians on the Rise, Stecher and Horowitz Young Artist Series, and Eslite Emerging Artist Series. Moreover, in part of group efforts, Fanya has encouraged and assisted younger generations of music students to continue their education and pursue their dreams through fundraising events such as the Saint Island Fundraising Concert, Weber State University All Steinway School Designation, and the Sid & Mary Foulgers School of Music. Fanya also dedicates herself to new music by performing with contemporary music organizations such as Focus and Axiom.

Cool, thanks for passing that along!

Join us tonight at 7:00 p.m. for Friday Night at Fred Fox, a live premiere concert featuring performances from our student ensembles.

Another wonderful showcase of the talent in the Fred Fox School of Music! Thank you for such artistic performances!

We are delighted to announce our last lecture of this season within the UA Bolton Guitar Studies Virtual Series, this one featuring Grammy award winner classical guitarist David Russell in a workshop on tremolo technique.

This event is scheduled for Friday, November 20 at 11:00 a.m. (MST). The meeting will last one hour and a half with a Q & A segment towards the end and it will be live streamed on the University of Arizona Guitar Studies Facebook page, where audience can submit their questions through chat.


Special thank you to Misael Barraza-Díaz for setting up everything, including our BGS YouTube page, where you can find all the lectures. Please make sure to subscribe, in order to receive notifications and be able to rewatch each video as it gets uploaded:
... See MoreSee Less

Applications are now open! Become a part of our studio here at
The University of Arizona Fred Fox School of Music!
#uasaxophones #beardownsaxos ... See MoreSee Less

Please is there any full scholarship program for me to study music at university of Arizona Fred fox school of music, am from Nigeria

Arizona Arts is proud to present violinist Carissa Powe performing in Centennial Hall. Her program, which featured both solo Bach as well as a modern piece by composer and violinist Jessie Montgomery, represents a 300-year leap through the timeline of classical music. Enjoy this award-winning violinist’s first performance in Centennial Hall - we’re certain she’s destined for halls far larger.