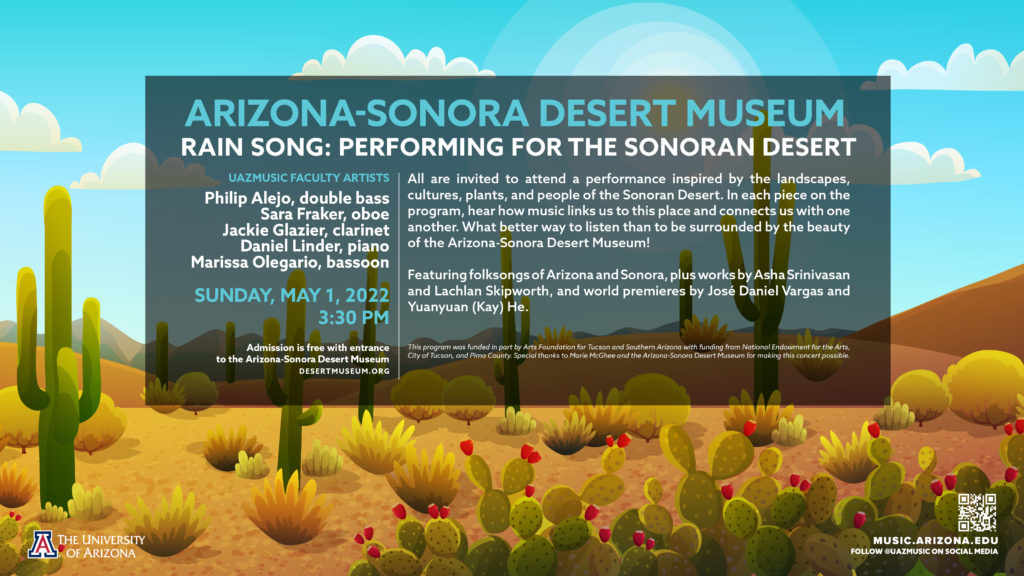 Admission is free with entrance to the Arizona-Sonora Desert Museum

This program was funded in part by Arts Foundation for Tucson and Southern Arizona with funding from National Endowment for the Arts, City of Tucson, and Pima County.

“Bury Me With a Band” and “Ju:kĭ Ñe’i” used with permission from the University of Arizona Press and Ofelia Zepeda.

Special thanks to Marie McGhee and the Arizona-Sonora Desert Museum for making this concert possible.

All are invited to attend a performance inspired by the landscapes, cultures, plants, and people of the Sonoran Desert. In each piece on the program, hear how music links us to this place and connects us with one another. What better way to listen than to be surrounded by the beauty of the Arizona-Sonora Desert Museum!
Featuring folksongs of Arizona and Sonora, plus works by Asha Srinivasan and Lachlan Skipworth, and world premieres by José Daniel Vargas and Yuanyuan (Kay) He.

A brief overview of the program:

Published at the University of Arizona in 1946, Canciones de mi padre contains Spanish-language folk songs from Arizona and Sonora collected and performed around the world by famed singer and Tucson-native Luisa Espinel. Linda Ronstadt paid homage to her aunt’s collection with two albums sharing the same title.

Braiding is based on the writing of plant ecologist Robin Wall Kimmerer and her 2013 book, Braiding Sweetgrass: Indigenous Wisdom, Scientific Knowledge and the Teachings of Plants. Braiding represents a major addition to the emerging body of new music concerned with climate change and deep ecology.

José Daniel Vargas is a Tucson-native and recent graduate of the Tucson Symphony Orchestra’s Young Composers Project. His Canto Hondo song collection sets poems by Francisco X. Alarcón, a poet who was known for his interest in Latino and gay identity, mythology, the Nahuatl language, Mesoamerican history, and American culture. World premiere

Pine Chant is a mesmerizing composition by Australian composer Lachlan Skipworth. Inspired by tree-ring climate data from the University of Arizona’s Laboratory of Tree-Ring Research, the piece is at once a sonic embodiment of twelve Arizona trees, and an emotional response to the climate crisis.

The Rain Song for baritone, double bass, and electronics was commissioned by double bassist Philip Alejo. Kay He writes: “Philip came to me with the beautiful idea to create a multimedia work which paints a portrait the Sonoran Desert. We chose to set two poems by Ofelia Zepeda as a way to honor one of the unique cultures of this land. Zepeda is a member of the Tohono O’odham Nation. Her poetry embraces O’odham traditions, the natural world, and experiences and stories of contemporary O’odham life.” World premiere

Philip Alejo is Associate Professor of Music, Double Bass at the University of Arizona, and Artist Faculty at the Bay View Music Festival. Previously he served as Associate Principal Bass of the Quad City Symphony and Visiting Professor of Bass at the University of Michigan. A former member of the Chicago Civic Orchestra, Philip has additionally performed with the Tucson Symphony, Arizona Opera, and Flint Symphony. Philip collaborates regularly with harpist Claire Happel in River Town Duo, which will release a recording of new commissions in 2020, sponsored by the Arizona Commission on the Arts. His numerous music festival residencies include Spoleto Festival USA, Lucerne Festival, Swannanoa Chamber Music Festival, Oaxaca Instrumenta, Aldeburgh Festival, Tucson Winter Chamber Music Festival, Pacific Music Festival, and Aspen Music Festival. Philip has also taught at the Arizona ASTA Bass Jams, Richard Davis Bass Conference at the University of Wisconsin, and El Sistema, El Salvador.

Hailed for her “robust playing and virtuosic performance” (San Diego Tribune) and “beautiful and clear tone” (The Clarinet Magazine), Jackie Glazier is an active soloist, chamber musician, orchestral clarinetist, pedagogue, and advocate of new music. As assistant professor of clarinet at the University of Arizona Fred Fox School of Music, Glazier is a committed pedagogue and mentor to future generations of clarinetists. She has performed throughout the United States and in China, Mexico, France, Belgium, the Netherlands, Luxembourg, and Croatia. As a soloist and a founding member of the saxophone / clarinet ensemble Duo Entre-Nous, Glazier is active in commissioning and performing new music. She has commissioned over 20 pieces with composers from the United States, Canada, France, Italy, Argentina, China, and Australia. As a soloist and chamber musician, Glazier has recorded for Naxos, Centaur, Toccata Classics, Mark Records, and Navona Records. She is Buffet-Crampon Artist and Vandoren Artist-Clinician.

Sara Fraker is associate professor of oboe at the University of Arizona and a member of the Tucson Symphony Orchestra. She is principal oboist of True Concord Voices & Orchestra, faculty artist at the Bay View Music Festival, and oboist of the Arizona Wind Quintet. Her innovative collaborations, which often explore intersections of music and ecology, include projects with ecologist/author Robin Wall Kimmerer (Braiding Sweetgrass) and dendroecologist Margaret Evans (UArizona Laboratory of Tree-Ring Research). She has served as executive producer and score editor for two recent recording projects, Johanna Beyer: Music for Woodwinds (New World Records, 2022) and Hans Winterberg: Chamber Music (Toccata Classics, 2018). Sara has performed in festivals at Tanglewood, Aspen, Chautauqua, Spoleto Festival USA, and the Schleswig-Holstein Orchesterakademie in Germany. She has presented recitals and masterclasses across the US and in Mexico, Canada, Japan, Australia, and the Tohono O’odham Nation. Raised in New Haven, Connecticut, Sara is a graduate of Swarthmore College, New England Conservatory, and the University of Illinois. sarafraker.com

Dr. Yuanyuan (Kay) He is a composer and multimedia artist with roots in China. Her works often explore and intertwine various forms of media to create unique audiovisual experiences that engage the audience. Many of her works involve collaborations with choreographers, dancers, video artists, audio technicians, and stage lighting and design artists. As a composer, she is very active in the music community. Kay serves as the Creative Director for Electronic Music Midwest (EMM), which is an annual music festival dedicated to programming a wide variety of electroacoustic music and providing high quality electronic media performances. She is also the founder and director of the TURN UP Multimedia Festival, which works to promote Interdisciplinary Collaboration, Culture-Connecting, and Equality. She is also the director of an immersive multimedia show StellarScape. She is currently an assistant professor at the University of Arizona Fred Fox School of Music, where she teaches composition, electro-acoustic music, multimedia, and orchestration.

Praised as a “pianistic chameleon” (Fanfare), Daniel Linder is a versatile pianist, chamber musician, and teaching artist. He has performed to high acclaim across the United States and in the United Kingdom, France, and Denmark. Recent accolades include the Fresno Musical Club Susan Torres Award, and prizes in the James Ramos International Competition, the Seattle International Piano Competition, and the Los Angeles International Liszt Competition. His recordings of solo and duo piano works by Daniel Asia are included on Ivory II (Summit Records), and he also appears on Johanna Beyer: Music for Woodwinds (New World Records). Dr. Linder is Assistant Professor of Practice in Piano at the University of Arizona’s Fred Fox School of Music, where he serves as keyboard area coordinator, teaches applied lessons and piano literature, and teaches honors seminars in music. Daniel holds degrees from Northwestern University and the University of Arizona, and was named Outstanding D.M.A. Graduate by the Keyboard Studies Department of USC’s Thornton School of Music in 2018. Please visit www.drlpianist.com for more information.

Known for her compelling and personality-driven performances, Marissa Olegario enjoys an active performance schedule as a soloist, chamber, and orchestral musician. Prof. Olegario has appeared in concerts at Avery Fisher Hall, Carnegie Hall, and the Kennedy Center under conductors such as James Conlon, John Adams, Peter Oundjin, Rafael Payere and Leonard Slatkin. Constantly seeking new artistic possibilities, Dr. Olegario’s performances have included multimedia collaborations with New York based projection designer Lisa Renkel and a commission of award-winning composer Shuying Li. Her other commissions include a duo for bassoon and bass clarinet, a new concerto by John Steinmetz, and a new solo piece by Aaron Houston. She enjoys an eclectic chamber career appearing at the Phoenix Chamber Society Winter Series, the Norfolk Chamber Festival, and the clasclas festival in Spain. She subs with the acclaimed Breaking Winds Bassoon Quartet and appeared on a Naxos-produced album alongside David Shifrin, Stephen Taylor, Frank Morelli, and William Purvis, featuring Beethoven’s serenades for winds.

Jose Vargas is a 2nd-year bachelor’s Student in Composition at the San Francisco Conservatory of Music. With an eclectic musical upbringing beginning with electric guitar and classic rock, Jose began playing double-bass in both band and orchestra in 6th grade, and eventually joined local youth orchestra program Tucson Junior Strings. In high school, Jose was introduced to playing jazz, funk, and soul music in jazz band class, as well as simultaneously furthering his classical studies. From the beginning of his musical journey, Jose was always fascinated with the creating music. Having the great opportunity of enrolling in the Tucson Symphony Orchestra’s Young Composers Project, Jose developed his craft in composition and realized that his next step after high school would be to study composition. Jose is currently studying with Dr. David Conte at SFCM.