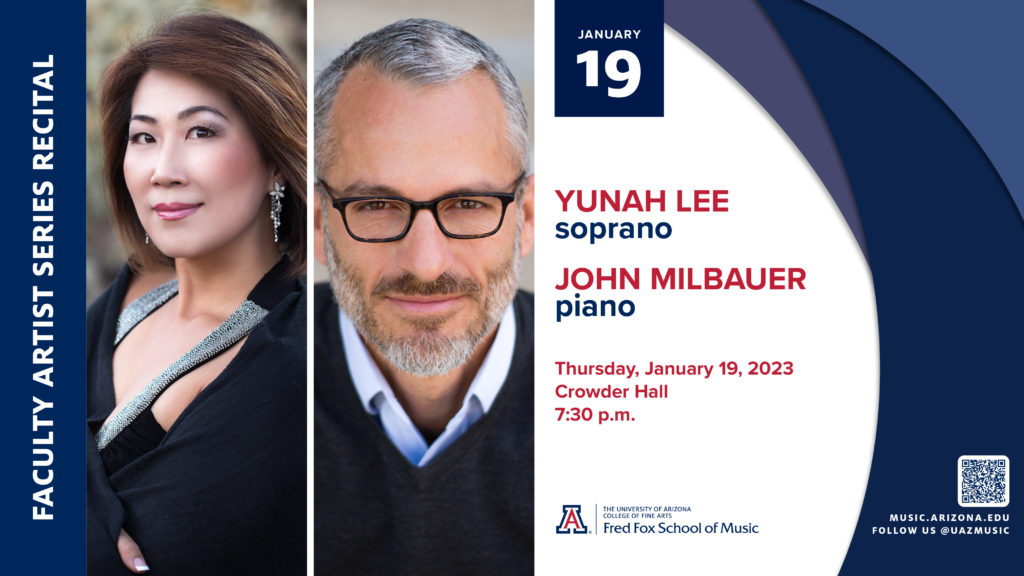 Korean American lyric Soprano Yunah Lee has been praised in the U.S., Europe and Asia for her “handsomely colored full lyric sound” (OPERA NEWS) and “picture perfect” acting (BERKSHIRE FINE ARTS). Performances in the title role of Madama Butterfly were hailed in Germany as “a revelation… [her] voice unites the girlish innocence and the wistful sensuality [of Cio Cio San]” (ONLINE MUSIK MAGAZIN). “…thoroughly captivating, above all thanks to Yunah Lee, who is utterly convincing in mood and presentation… a commanding and touching performance revealing the highs and lows of Butterfly’s emotions.” (DAS OPERNGLAS).

Ever since she made her professional debut with New York City Opera while a student at the Juilliard school, Ms. Lee has been in demand for operatic engagements all around the world. She is known internationally for her signature role as Madama Butterfly, having performed the role of Cio Cio San more than 170 times with opera theaters in New York, including the Metropolitan Opera, Boston, New Jersey, Michigan, Florida, North Carolina, Virginia, Memphis, Minnesota, Quebec, Kentucky, Ohio, Dallas, Austin, Colorado, California, Utah, Washington D.C, Belgium, Ireland, Germany, and Switzerland, among others.

Ms. Lee’s lush lyric soprano voice is especially well suited to Puccini’s heroines such as Mimi in La Boheme, which she has sung in over 70 performances. Her other operatic roles include Nedda, Liu, Micaela, Adina, Zerlina, Donna Elvira, Contessa Almaviva, Pamina, Leila, Antonia , Marguerite, Juliette and Suor Angelica. Recently, she made her role debuts in the title role in Dvorák’s opera Rusalka with the Korea National Opera, and the role of Tatyana in Eugene Onegin with the Seoul Philharmonic Orchestra.

As an active concert singer, Ms. Lee has sung Handel’s Messiah, Mozart’s Requiem, Haydn’s The Creation and Bach’s St. Matthew Passion with the New York Oratorio Society at Carnegie Hall, and Verdi’s Requiem with National Chorale at Avery Fisher Hall. Ms. Lee also performed in Mahler’s Symphony 2 with the Hiroshima Symphony in Hiroshima for a special concert commemorating the 60th anniversary of the atomic bomb blast.

Ms. Lee has toured around the world giving her solo recitals in Tokyo, Shanghai, Saó Paulo, Los Angeles, New York’s Carnegie Hall and the Seoul Arts Center. Ms. Lee was also featured in the Christmas Concert with Beijing National Symphony in China. Ms. Lee’s first recording of “Four Seasons in Korea” with I Musici was released on Arcadia label. Her other recording credits include performances of songs by Paul Salerni on Albany records.

Ms. Lee is a sought after voice teacher, having been invited to give masterclasses by institutions in Italy, Korea and the US. She recently accepted an appointment as Assistant Professor at the University of Arizona, Fred Fox School of Music.

Ms. Lee received her musical and operatic training from New York’s Juilliard School and The Juilliard Opera Center after receiving a Bachelor of Music degree music from Hanyang University in Seoul, Korea.

Steinway Artist John Milbauer has recently performed in China, Brazil, Colombia, Costa Rica, Mexico, Spain, Switzerland, and Japan as well as throughout the United States. Highlights of the past two seasons include Ravel’s Concerto in G with the Boston Pops and Keith Lockhart in Boston’s Symphony Hall, Poulenc’s Aubade with San Diego Winds, recitals with Stephanie Houtzeel of the Vienna State Opera, residencies with the Conservatorios Nacionales Superiores of Sevilla and Jaén in Spain, and a tour of major cities in China. Recent projects include performances of Milbauer’s “Which Side Are You On?” program based on themes of protest, immigration, and workers’ rights. A 2017 review in Sevilla said “this extraordinary program reminds us that we all can be refugees, exiles, and immigrants…and John Milbauer says this through the keys of the piano.” France’s Republique du Centre has called him “a virtuoso of the first magnitude” while American Record Guide awarded him a Critic’s Choice—top 10% of reviews for the year—writing, “Milbauer employs a full expressive range, performs with astounding delicacy, and conveys unspeakable wonder through an intimate touch and astonishing versatility.” A laureate of the Orléans Concours in France for piano music of the 20th Century, he has performed concerts devoted only to chance music and enjoys playing music that employs electronic sounds, prepared piano, extended techniques, and graphic notation; in a similar vein, he has contributed a chapter on the performance of the music of John Cage to The Pianist’s Craft series. His Humanities Seminar “Beyond Brahms at the Piano”—a twelve-hour multi-disciplinary lecture/recital on the fragmentation of compositional languages over the last century—won the Humanities Seminar Program Superior Teaching Award in 2020 from UA’s College of Humanities. A versatile musician, Milbauer has performed with the Mills Brothers and Pink Martini.

Milbauer studied music, classics, and government at Harvard College before earning degrees from the Eastman School of Music, The Juilliard School, Manhattan School of Music, and, as recipient of a Fulbright grant, the Liszt Academy in Budapest. He was awarded the Eastman Performer’s Certificate (the highest performance honor of the school) and the Wolodarsky Prize from the Banff Centre, and was nominated for the Gina Bachauer prize for outstanding pianist at Juilliard. His teachers include Jerome Lowenthal, Ferenc Rados, György Sebök, and Rebecca Penneys. Since 2012 he has been Co-Chair of the Chautauqua Institution Piano Program, helping to transform it into one of the premiere summer piano programs in the Americas.

Milbauer spent 2019-20 as a John F. Kennedy Fellow at Harvard University’s Kennedy School of Government under the guidance of Prof. Ron Heifetz, Co-Founder of Harvard’s Center for Public Leadership. He earned a Master in Public Administration degree from HKS in 2020, having been Co-Chair of the HKS Arts and Culture Caucus as well as Associate Editor of the Harvard Kennedy School LGBTQ Policy Journal. In addition to the MPA curriculum at HKS involving global development and governance, adaptive leadership, behavioral economics, and negotiation, Milbauer studied innovation ecosystems and regional acceleration at MIT Sloan School of Management and arts entrepreneurship at Harvard Business School.

“Crystal-clear Mozart with exemplary ornamentation…Milbauer displayed his musical sovereignty in Ravel’s Tombeau…a master of agogic and rhythm, and one hopes for his return.”
—Walliser Zeitung, Switzerland

“The Bartok Concerto, brilliantly played by pianist John Milbauer, was the audience hit, from a rhythmic first movement filled with nature/bird sounds to an absolutely beautiful, pensive second movement in which the soloist, as if in solitary space created by quivering strings, seems to ruminate before concluding with an excitingly rapid final movement.”
—The Sacramento Bee