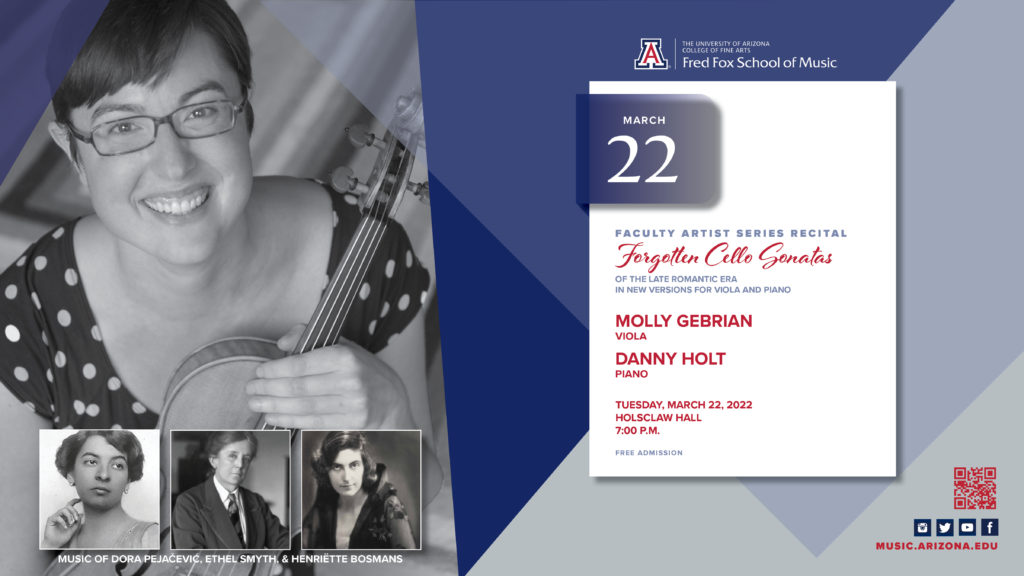 Violist Molly Gebrian has distinguished herself as an outstanding performer, teacher, and scholar throughout the US and Europe. Her love of contemporary music has led her to collaborate with many composers, often in premieres of works written for her. She has worked closely with the Ensemble Intercontemporain and Pierre Boulez for performances at the Lucerne Festival and she spent the 2011/2012 academic year in Paris to undertake an intensive study of contemporary music with violist/composer Garth Knox. Her other principal teachers include Peter Slowik, Carol Rodland, and James Dunham. Molly completed her Doctor of Musical Arts in viola performance from Rice University’s Shepherd School of Music and also holds graduate degrees in viola performance from the New England Conservatory of Music, and Bachelor’s degrees from Oberlin College and Conservatory of Music, in both viola performance and neuroscience. She served as the Assistant Director for two interdisciplinary conferences on music and the brain while at Rice, has published papers dealing with music and neuroscience in the Journal of the American Viola Society, Frontiers in Psychology, Flute Talk Magazine, The Oxford Handbook of Music and the Brain, and The Strad. Her background in neuroscience gives her unique insight into how the brain learns and how musicians can best use this information to their advantage in the practice room. Given this expertise, she is a frequent presenter on topics having to do with music and neuroscience at conferences and universities in the US and abroad. During the summer, she is on faculty at the National Music Festival and Montecito International Music Festival, and has also taught at the Sewanee Summer Music Festival. After teaching for five years at the University of Wisconsin-Eau Claire, she joined the faculty at the Fred Fox School of Music at the University of Arizona in the fall of 2019.

Pianist Danny Holt has been called “exceptional” by the Los Angeles Times, and The Record (Waterloo, Ontario) described him as “the classical music equivalent of an extreme sports athlete.” He brings his boundless energy and wit to performances of classical repertoire as well as music by the composers of today. He has performed in venues such as Carnegie Hall, Walt Disney Concert Hall, and the Hollywood Bowl, and has performed with the Los Angeles Philharmonic, Bang on a Can All-Stars, and Blue Man Group, among others. Gramophone called Holt’s Fast Jump CD (Innova Recordings, 2009) “a compelling showcase for Holt’s innate virtuosity and gregarious temperament”. He has held fellowships at the Bang on a Can Summer Music Institute, the Weill Music Institute at Carnegie Hall, and New England Conservatory’s Summer Institute for Contemporary Performance Practice, and has received awards and grants from ASCAP, Yamaha, the American Composers Forum, the Yvar Mikhashoff Trust for New Music, and others. He holds degrees from California Institute of the Arts, Hampshire College, Smith College, and Interlochen Arts Academy. For more information, visit: www.dannyholt.net