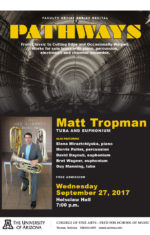 Matthew Tropman continues his series of annual solo recitals showcasing original and transcribed repertoire for the euphonium and tuba. This year’s recital will focus specifically on tuba repertoire and feature a rarely performed “classic,” Trygve Madsen’s Sonata Op. 34 from 1980, a tour de force for both tubist and pianist alike. Dr. Tropman will also perform not-yet-published “Krump” for tuba and distortion pedal by Anthony O’Toole.

Dr. Matt Tropman currently serves as assistant professor of tuba and euphonium at the University of Arizona and is an active freelancer, soloist and chamber musician. His performances have been praised in numerous publications such as “The New York Times,” which stated, “Tropman makes a serious case for the euphonium as a solo instrument.” An active clinician and recitalist on both the euphonium and tuba, Matt has performed and taught throughout the United States. and Europe.

Matt’s two commercially-released CDs, “Continuum” and “From the Balcony” (Summit Records), have been featured on programs such as NPR’s “All Things Considered.” He has performed with numerous bands, orchestras and chamber groups including the San Francisco Symphony and the Detroit Symphony. In his early career as a member of the U.S. Marine Band (President’s Own), he frequently performed as a soloist throughout the United States on the band’s national concert tours.

Bulgarian pianist Elena Miraztchiyska completed her Master of Music degree at the Yale School of Music in May 2010 as a student of Professor Claude Frank and Professor Boris Berman. Mrs. Miraztchiyska made her solo debut with the Bulgarian Chamber Orchestra in her home country at the age of 12 and since then she has performed as concerto soloist with the Varna Philharmonic, Sofia State, Arizona, and UNLV Symphony and Chamber Orchestras. She has appeared in solo and collaborative recitals in Bulgaria, Poland, Japan, and the United States. Elena is also a winner of numerous national and international competitions held in Bulgaria. In 2007, she was the grand prize winner of the MTNA National Young Artist Competition in Toronto, Canada and received a Steinway Model M grand piano. As a participant in numerous summer programs, she has worked with such artists as Emanuel Ax, Michel Beroff, Emanuel Krasovsky, Boris Bloch, Ursula Oppens, and Mykola Suk.