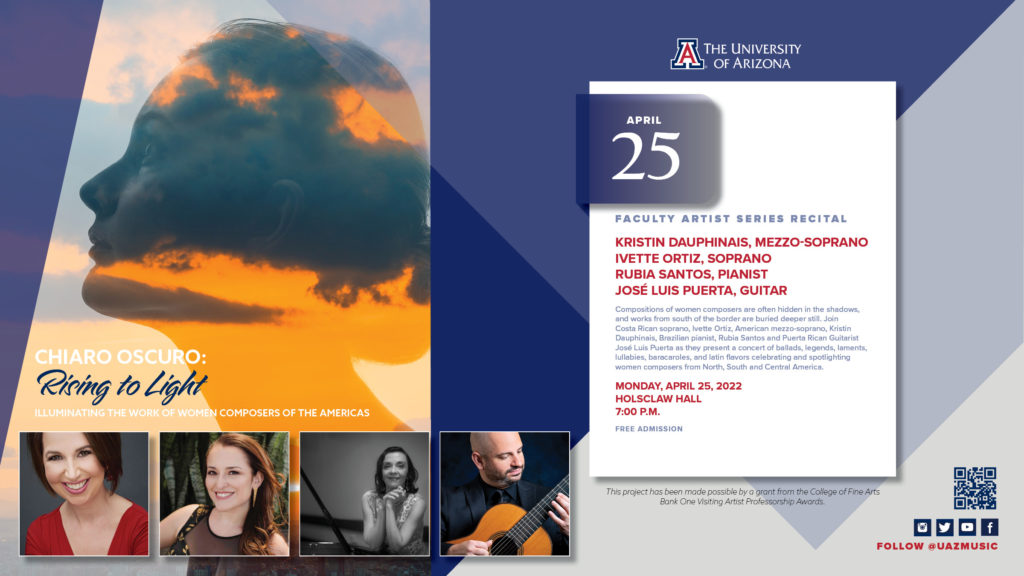 Chiaro Oscuro: Rising to Light
Illuminating the Work of Women Composers of the Americas

This project has been made possible by a grant from the College of Fine Arts Bank One Visiting Artist Professorship Awards.

A voice praised as being “passionate,” “strong and agile” and imbuing her roles with “power and excitement” mezzo-soprano Kristin Dauphinais is highly regarded for her artistry and versatility.  She has worked in a variety of genres including musical theatre, opera, concert, oratorio, chamber music and solo recitals. Her performing career has taken her throughout the United States as well as internationally with tours in Italy, China, Australia and additional concert performances in Germany, Spain, Austria, Mexico, Costa Rica, Brazil and Luxembourg.   Recent concerts include featured programs on the London Song Festival (UK),  Carneggie Hall (Weill Recital Hall), the Tucson Desert Song Festival, Southern Arizona Symphony Orchestra, Opera Festival San Luis Potosì (Mexico) and the Saarburger Serenaden, International Chamber Music Festival in Saarburg, Germany and with Opera Roanoke.

As an orchestral soloist, Ms. Dauphinais is known for her performances of works by Manuel de Falla including Siete canciones populares Españolas, El amor brujo and El sombrero de tres picos with orchestras such as the Phoenix Symphony, Tucson Symphony the Southern Arizona Symphony, and the Catalina Chamber orchestra. Additional performances as a featured soloist with orchestra include semi—staged productions of operatic arias and duets with Symphony Orchestra of Rio Grande do Norte (Natal, Brazil) and Opera Roanoke, as well as Alban Berg’s Sieben Frühe Lieder and  Mahler’s Kindertotenlieder and Rückert Lieder with the Arizona Symphony, Mozart’s Exultate, jubilate with the Apperson Strings and again with the Cadillac Symphony Orchestra, and Easy to Love – a review of Cole Porter, Richard Rodgers and Jerome Kern with the Sacramento Choral Society and Orchestra as well as Mozart’s Coronation Mass and Requiem, Mendelssohn’s St. Paul, Haydn’s The Creation, and Handel’s Messiah, Beethoven’s Mass in C, Bruckner Te Deum, narrations with chamber orchestra in William Walton’s Façade, and Stravinsky’s A Soldiers Tale.

On the operatic stage, her recent roles include Maddalena in Rigoletto, Dorabella in Così fan tutte, Hänsel in Hänsel und Gretel, Mrs. McLean in Susanna, Zweite Dame and Dritte Dame in Die Zauberflöte, Farnace in Mitridate Re di Ponto, the title role in Handel’s Xerxes, and the role of Ottone in the American professional première of Vivaldi’s Ottone in Villa for the 2007 Arizona Vivaldi Festival.

Dr. Dauphinais is the chair of vocal studies on the faculty of the University of Arizona in Tucson, Arizona and an active pedagogue and presenter teaching and serving as an adjudicator at international festivals in the United States, Mexico, Brazil, Germany and Costa Rica.

Ms. Ortiz-Davenport has been recognized for her versatility, passion and musicality in opera as well as art song, zarzuela and oratorio.

She holds a master’s and a Doctorate in Musical Arts from the University of Arizona.

Aside from her active career as a singer, Mrs. Ortiz-Davenport maintains a full studio at the University of Costa Rica where she serves as the chair of Vocal Studies. She has been invited on several occasions to Mexico to perform concerts and teach Master Classes. Her art has taken her to perform in the United States, Luxemburg, Germany, México and Italy.

Brazilian Pianist Rúbia Santos is among the most sought-after pianists from her home country.

“Ms. Santos has a provocative pianism and an enthusiastic temperament….”

Santos’s performances include the standard classical repertoire, yet she is devoted to presenting and premiering works by composers of the Americas, and more strongly from her native country.  This passion has led her to the forefront of performance and research of Brazilian music.

Santos has collaborated with various artists and ensembles and has performed as a guest artist in international festivals, such as the opera program AIMS (Austria), Abiquiu Chamber Music Festival  (Santa Fe), Festival Interncaional de Campos do Jordão (Brazil), and Festival Interacional Bach (Peru) to cite a few.  She co-founded the Duo Brazil Brilliance with Brazilian violinist Cármelo de los Santos and the Duo Braziliana with American mezzo-soprano Melanie Ohm. Her love for poetry and knowledge of languages has taken her into various collaborations with singers, among them Christiane Oelze, Deborah Domanski, Sarah Wolfson, David Dillard, Javier Gonzales, Laura de Souza and Luciano Simões.  For many years, Santos has collaborated with members of the LA and Berlin Philharmonic, as well as with members of the Phoenix, Colorado, and Baltimore Symphonies.

Santos has received many awards as a pianist and teacher. She has adjudicated and presented at MTNA, the College Music Society, The Gilmore Keyboard Festival, and the Mediterranean Studies Association. Currently she is on the faculty at the University of Costa Rica, and has previously taught at Universities in the US and Germany.

After her piano studies with pianist and composer Lina Pires de Campos in Brazil, Santos moved to Germany where she earned her artist diploma in piano solo at the Hochschüle für Musik in Cologne, mentored by Günter Ludwig (solo piano), Hartmut Höll (lLedbegleitung), and the Amadeus Quartet (chamber music). She holds a masters and a doctor of musical arts in collaborative piano from Arizona State University, having studied with Eckart Selheim (collaborative piano), William Reber (opera), and Caio Pagano (piano).

Since 2015 Santos has been a Guild Certified Feldenkrais Practitioner, emphasizing the practice of the Method for musicians to enhance performance and avoid injuries.

Jose Luis has performed in Puerto Rico, Festival Alfonso Ortiz Tirado in Mexico, Canada, Spain, and throughout the United States. He’s been featured in the University of Arizona Alumni Magazine (Spring 2016), Acoustic Guitar (Fall 2017), and in Tucson Guitar Orchestra Strings Along, for Arizona Public Media. He has been invited to perform for the Treasure Coast Guitar Society and for the Sundays in the Garden concert series at Tohono Chul Park on numerous occasions as a duo, ensemble, and conductor. He is a founding member of  Grupo Riken, a Tucson ensemble that specializes in folkloric music from the Caribbean and Latin America.

In 2019 He founded the Tucson Guitar Quartet In Spring 2020 they release the album Latin American Soundscapes, which includes two performances-recording world premieres.  by Sergio Assad, and Edwin Guevara.

His latest discography “Apunti – Puerta-Vázquez Duo”  will be release in Spring 2022 under the label Constrastes Records in Sevilla, Spain, distributed by Naxos.  The album is entirely music from Mario Catelnuovo-Tedesco.

José Luis Puerta received his Doctor of Musical Arts degree in guitar with a minor in Ethnomusicology from the University of Arizona as well as a Master of Music, and a Bachelor’s degree in guitar performance from the Conservatory of Music in Puerto Rico. He also graduated from the prestigious Escuela Libre de Música Ernesto Ramos Antonini in San Juan, Puerto Rico.