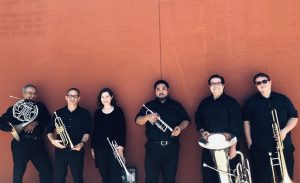 Faculty artist Jason Carder collaborates with Monsoon Brass to present three world premières along with exciting music from around the globe. The newly commissioned works by Grammy-nominated composer Rafael Piccolotto de Lima, Benedikt Brydern and UA alumnus Spencer Clarke include improvisation as a compositional element in their pieces.

Betsy Bright, trumpet, has been a member of the Tucson Symphony trumpet section since 2003 and she is also a member of the TSO Brass Quintet, Monsoon Brass, True Concord Voices & Orchestra, and the Tucson Pops Orchestra.  Additionally, Betsy has performed with the Pittsburgh Symphony, San Diego Symphony Orchestra, Saint Louis Symphony Orchestra, National Symphony Orchestra, The Phoenix Symphony, Arizona Opera, American Wind Symphony, Britt Music Festival, Hot Springs Music Festival, and Bay View Music Festival. Betsy is also a deeply committed trumpet teacher.  She has maintained a private trumpet studio since 1997 and she is the founder and director of Tucson Brass Workshop.  Originally from Columbia, South Carolina, Betsy studied at the Shenandoah Conservatory in Winchester, VA.  She graduated summa cum laude in 2003 with a Bachelor of Music in trumpet performance and a minor in composition.  Betsy is married to TSO principal tuba, David Morgan.  They live with their adorable sons, Max and Oliver, and their Italian Greyhound, Giuseppe.

Hayato Tanaka, trumpet, is principal trumpet of the Tucson Symphony, which he joined in 2017 as 3rd trumpet.  He remains a highly sought after musician by major orchestras throughout the United States.  Hayato has performed with the San Francisco Symphony, Pittsburgh Symphony, Houston Symphony, Los Angeles Philharmonic, San Diego Symphony, and Orchestre Symphonique de Montréal.  Hayato is a distinguished chamber musician, most notably with The Kyôdai Brass, which received the Aspen Music Festival Brass Quintet Fellowship in summer of 2013 and went on to win first prize in the brass ensemble category of the Plowman Chamber Music Competition in March, 2015. Hayato was born in Tokyo, Japan.  He moved to the United States at the age of 15 to study at the Interlochen Arts Academy and later participated in many music festivals and seminars, including the Boston University Tanglewood Institute, the Eastern Music Festival where he was a concerto competition winner, the Chautauqua Music Festival, the Chosen Vale International Trumpet Seminar, and the New York String Orchestra Seminar.  Hayato completed his artist certificate program at the Cleveland Institute of Music in 2015 and then moved to Los Angeles to begin a residence at the Colburn School as a professional studies certificate program student studying under James Wilt, associate principal trumpet of LA Philharmonic.

Victor Valenzuela is currently 2nd Horn with the Tucson Symphony Orchestra. As well as holding this position, he is also Instructor of Brass at Pima Community College. Mr. Valenzuela holds Degrees from New Mexico State University and Northwestern University. His Instructors have included Julie Landsman, Dale Clevenger, Nancy Joy, Dr. Warner Hutchison and Richard Lambrecht. He has performed with The Royal Philharmonic Orchestra of London, The Phoenix Symphony, El Paso Symphony, Flagstaff Symphony, Santa Fe Symphony, Boulder Philharmonic Orchestra and the Arizona Opera. He has toured with the National Symphony of Mexico during its 2002 North American Tour. Mr. Valenzuela has performed for the Opening and Closing Ceremonies of the 1984 Olympic Games, the 1986 re-opening of the Statue of Liberty and the 1988 Celebration of the Declaration of Independence. In July 2000, Mr. Valenzuela performed, along with his Colleagues of the Tucson Symphony Horn Section, at the International Horn Society Conference in Beijing, China. Mr. Valenzuela is a performing artist and member of the Paloma Winds at the Music for Greer Chamber Festival. His hobbies include Golf and more Golf. The three loves of his life: his wife Susana and their two boys Christopher and Alex.

Joseph Muñoz is a trombonist from the city of San Diego, California. He received his Bachelor’s in Performance with Teacher Certification from the University of Michigan, Ann Arbor in 2008. While at Michigan, he studied with David Jackson and Dennis Wilson. Joey has attended the Idyllwild Music Festival, the Hot Springs Music Festival, and the Aspen Music Festival. He has been the recipient of the American Academy of Conducting at Aspen Orchestra Fellowship. He has also been the recipient of the Aspen Chamber Symphony Fellowship where he performed Martin’s Concerto for Seven Winds as a featured soloist alongside other faculty members. While there he studied with Per Brevig and Warren Deck. Joey received his Master’s degree in Performance and Doctorate of Musical arts degree from UCLA in 2011 & 2013. While at UCLA, he studied with James Miller & Patrick Sheridan and wrote a dissertation titled, “An Analysis and Performance Guide of Sound the Tucket Sonance and the Note to Mount for Trombone and Tape by Barry Anderson.” He has previously served for four seasons as the Principal Trombone of the Young Musician’s Foundation Debut Orchestra based in LA and participated in their international tour of China. Joey is a freelance low brass teacher and has subbed for faculty of the High School Curry Summer Music Camp and Catalina Foothills District Elementary Band Day. He maintains a studio of private trombone students in Tucson, Arizona. Joey has been a Elementary School Band Teacher for the Amphitheater School District since 2014. He is currently teaching at three elementary schools. Besides playing in the Tucson Symphony, being a public school teacher and being a private trombone teacher, Joey plays regularly as a freelance musician. He performs with such groups as True Concord Voices & Orchestra, Tucson Pops Orchestra, Broadway in Tucson and various churches such as St. Philip’s.

David Morgan was appointed Principal Tuba of the Tucson Symphony Orchestra in 2010. He hails from Vienna, Virginia, a suburb of Washington, DC. David studied tuba with Michael Bunn (Kennedy Center Opera House Orchestra) at the Shenandoah Conservatory; he earned a bachelor of music in tuba performance in 2003 and minored in bass trombone. He later began graduate work at Carnegie Mellon University where he studied tuba with Sumner Erickson of the Pittsburgh Symphony. In addition to the TSO, David is a member of the TSO Brass Quintet, Tucson Pops Orchestra, True Concord Voices & Orchestra, and Variance Brass Quintet.  He has performed with the San Diego Symphony as well as the Aspen, Hot Springs, and Bay View Music Festivals. He has been featured as a soloist with the Tucson Symphony, Tucson Pops Orchestra, and Arizona Symphonic Winds.  He is married to Betsy Bright, TSO’s 2nd trumpet. 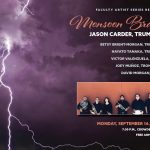