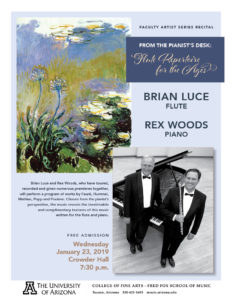 Brian Luce and Rex Woods, who have toured, recorded and given numerous premieres together, will perform a program of works by Fauré, Hummel, Mathias, Popp and Poulenc. Chosen from the pianist’s perspective, the music reveals the inextricable and complimentary textures of this music written for the flute and piano.

BRIAN LUCE is the professor of flute at the University of Arizona and a Yamaha Performing Artist. Dr. Luce has performed as principal flute of the Champaign-Urbana, Midland-Odessa and Johnstown symphony orchestras and has performed with the Dallas Chamber Orchestra, Dallas Bach Society, Dallas Wind Symphony, Keystone Wind Ensemble and the Tucson Chamber Orchestra. As a soloist, he has performed throughout the United States, Europe, Korea, Japan and China and has performed concertos with orchestras in the United States and the Republic of Korea. He has been featured at music festivals sponsored by the National Flute Association, British Flute Society, Shanghai International Exposition, Soka International Harp Festival, Texas Flute Society, Florida Flute Association, Mid-South Flute Society, Las Vegas Flute Club, Albuquerque Flute Association, Flute Society of St. Louis, Arizona Flute Society and Tucson Flute Club. His performances have been broadcast throughout the United States and his recordings are recommended references by music education associations including the Associated Board of the Royal Schools of Music (ABRSM). Acclaimed as “an authoritative soloist,” his Albany Records SACD, Music of the Superpowers: Sputnik, Spies, and the Space Race, has been lauded by The American Record Guide: “This release should be of particular interest for the less known, seldom recorded Denisov and Smirnova, though everything on it is enjoyable from beginning to end. Brian Luce plays with flair and intelligence…” He has also made the premiere recording of Anthony Plog’s Concerto for Flute and Wind Ensemble with the University of Arizona Wind Ensemble. His release with Carrol McLaughlin, Allume, includes numerous premiere recordings of original works and transcriptions for flute and harp. He has given recitals and master classes throughout the United States, Europe and Korea. Editions BIM and IntegrityInk publish his compositions, arrangements and realizations. His performance and pedagogy articles have appeared in Flute Talk Magazine, and his dissertation, “Light from Behind the Iron Curtain: Style and Structure in Edison Denisov’s Quatre Pièces pour flûte et piano,” earned the 2001 Morgan Outstanding Dissertation Award from the University of North Texas. Dr. Luce has previously taught at universities in Illinois, Texas, and Pennsylvania and tutored numerous young flutists across the nation. Brian is a prizewinner of the National Flute Association Young Artist Competition, Myrna Brown Young Artist Competition, Mid-South Young Artist Competition, Kingsville International Young Artist Competition and University of North Texas Concerto Competition. His principal teachers include Mary Karen Clardy, Kathleen Chastain, Jacob Berg and David Etienne. As an Arizona native, and avid outdoorsman, Brian enjoys trekking afield the wonderful alpine regions of the state with his family. He volunteers his time to his local Little League as a coach and board member.

Since presenting his first public solo recital over 50 years ago, REX WOODS has performed as a soloist, accompanist, and chamber musician throughout the United States and in Canada, Mexico, France, China and Australia. He recently performed as concerto soloist with the chamber orchestra of the University of Michoacán and in recital at the Centro Mexicano para la Música y Artes Sonoras (CMMAS). Recent chamber music appearances include recitals at the National Flute Association Conventions, the University of Utah and local performances with the Arizona Wind Quintet, several faculty recitals and the Arizona Symphony Orchestra. Dr. Woods received his musical education at Brigham Young University, the University of Arizona, the University of Southern California, and the American Conservatory at Fontainebleau. He was awarded the Otto Guth Memorial Award from the San Francisco Opera Center for excellence in vocal coaching and was the recipient of the Premier Prix de Fontainebleau in chamber music. He holds the degree of Juris Doctor from Arizona State University. Professor Woods has served on the faculties of the University of Texas at Austin and the Interlochen Center for the Arts. Since 1988, he has taught at the University of Arizona, including 14 years as an administrator in the Fred Fox School of Music.