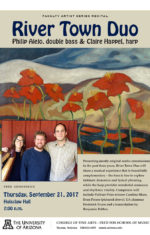 Presenting mostly original works commissioned in the past three years, River Town Duo will share a musical experience that is beautifully complementary – the bass is free to explore intimate dynamics and lyrical phrasing, while the harp provides wonderful resonance and rhythmic vitality. Composers will include Pulitzer Prize winner Caroline Shaw, Evan Premo, UA alumnus Frederick Evans and a transcription by Benjamin Britten.

To date, River Town duo has commissioned six composers to write works for double bass and harp. “For Claire and Philip” is a 2014 work by Pulitzer Prize and Grammy winning composer Caroline Shaw. Hannah Lash, who teaches composition at Yale University, wrote “Leaves” and “Space” in 2015. River Town Duo received generous support from the American Harp Society Grants Program to fund both commissions. Frederick Evans, a graduate from the MM in Composition program at the University of Arizona, composed “On Lotusland” in 2015. Composers Evan Premo and Whitney Ashe have recently written new compositions for River Town Duo. Premo is a composer, bassist, and former member of The Academy, an esteemed partnership between the Juilliard School and Carnegie Hall. Ashe isa composer whose classical and jazz compositions have been recorded for television (Warner Bros.) and theater (The Public Theater, New York City). This concert will feature the world premiere of “Oxygen,” a new five movement work from Stephen Taylor, professor and chair of composition-music theory at the University of Illinois.

Claire Happel is a versatile performer in music and movement. As a harpist, she has performed with the St. Louis Symphony and Civic Orchestra of Chicago among others and formed chamber projects with oboist Karisa Werdon, bassist Philip Alejo (River Town Duo), guitarist James Moore and mandolin player Jeremy Harting (Noble Fowl Trio), and violist Kim Uwate and flutist Kathleen Winters (Trio 114). An advocate of new music, she has performed with contemporary ensembles such as Ostravská Banda, the Chicago Composers Orchestra, International Ensemble Modern Academy, and on the Pulitzer Series of St. Louis, curated by David Robertson. While in graduate school, she founded and directed the group, Yale Movement Improvisation and Composition, and collaborated with choreographer Jennifer Monson to perform live harp with electronics by Zeena Parkins for the dance work, “La Merita.” She has received two City of Chicago Cultural Affairs Grants, an American Harp Society Grant, an Illinois Arts Council Professional Development Grant, and an Urbana Arts Grant, and has performed at American Harp Society Conferences in Chicago and Tacoma, presented at the World Harp Congress in Dublin, and was a Fellow at the Saratoga Harp Colony. She received a Fulbright Grant in 2007-2008 to study with Jana Bouskova in Prague and holds degrees in music performance from Yale University and the University of Illinois, where she also received a BFA in Dance. She currently teaches harp, Alexander Technique, and movement at Valparaiso University and Olivet Nazarene University.