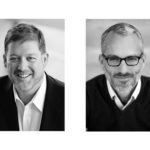 The Faculty Artist Series at the University of Arizona Fred Fox School of Music presents baritone Andrew Stuckey and pianist John Milbauer featuring Franz Schubert’s “Winterreise.” The free-admission performance will be held at 7:00 p.m. in Holsclaw Hall on Tuesday, January 23, 2018.

Dr. Andrew Stuckey and Dr. John Milbauer are pleased to perform Franz Schubert’s astounding song cycle, Winterreise. Set to the poetry of Wilhelm Müller, these songs address facets of grief and loss. In regard to an early performance of Winterreise, Schubert himself (reportedly) invites us to “Come…and I will play for you a cycle of terrifying songs; they have affected me more than has ever been the case with any other songs.”

This recital offers another opportunity for Fred Fox School of Music audiences to hear the beautiful and exquisite sound of the new Steinway Model B piano in Holsclaw Hall, which was generously donated by Peter and Debbie Coogan.

“Baritone William Andrew Stuckey… has a leonine voice of dark, smoky sonority and a stage presence to go with it.” (Chuck Klaus, Syracuse Post-Standard)

“William Andrew Stuckey’s baritone deserves praise not only for its full-throated, rich tone but for the grace with which he reaches his audience.” (Norman and Bette Seigerman, Sarasota Arts & Entertainment)

“One hears a Rigoletto or a Macbeth in his voice.” (Jerome Sehulster, Stamford Advocate)

“A rich, buttery voice. A wide emotional scope and actor’s grace. A stage presence that captivates the hearts of audiences.”

These accolades and more have followed baritone William Andrew Stuckey, whose opera and concert performances are widely acclaimed for their visceral power and rich beauty. His exploration of the character’s complex persona, reviewers noted, was displayed winningly in arias whose vocal agility ranged from pensive whispers to despairing outbursts. His interpretation of Enrico in “Lucia di Lammermoor” with the Syracuse Opera and the Connecticut Grand Opera brought praise for his “unusual sensitivity.”

Mr. Stuckey is a baritone whose many and varied roles speak to his accomplished voice and broad appeal. Mr. Stuckey sang the title role of Rigoletto with Opera on the James. He had the honor of working with the late maestro Lorin Maazel as Michele in “Il tabarro,” Sonora in “La fanciulla del West” and Iago in “Otello.” As the black-hearted Iago in Opera Roanoke’s stellar production, the Roanoke Times deemed his portrayal “not to be missed.” With the Festival Lyrique-en-mer in France he debuted, with great success, the title role in the comic opera “Falstaff,” following up with Germont in “La traviata,” a role he has perfected with several opera companies, including Santa Fe Opera, Opera Delaware and Opera New Jersey.

Mr. Stuckey has put his unique stamp on many varied roles including Tonio in “I Pagliacci,” and Sharpless in “Madama Butterfly,” Don Pizarro in “Fidelio,” the title role in “Gianni Schicchi,” and the High Priest in “Samson et Dalila.” He has interpreted these and other leading roles for opera houses throughout the United States, including the Washington National Opera, San Francisco Opera, and the opera houses of Santa Fe, Baltimore, Palm Beach, Portland, Augusta, Tulsa, Kansas City, St. Louis and Sarasota.

Mr. Stuckey’s talents were recognized early in his career. He was chosen by the Lyric Opera of Chicago for its two-year apprentice program, out of a field of more than 1,200 performers to audition. Prior to that, he was a resident artist for the Portland Opera and apprenticed twice with the Santa Fe Opera. Over the years, he has received many prestigious prizes, awards and grants, including the Sara Tucker study grant, the William Matheus Sullivan Foundation grant and The Union League grant. He won first prize in both the Florida Grand Opera’s Young Patronesses of the Opera competition and the Palm Beach Opera competition. He was also a National Semi-Finalist for the Metropolitan Opera National Council Auditions.

Steinway Artist John Milbauer has recently performed in Brazil, Colombia, Costa Rica, Mexico, Spain, Switzerland, and Japan as well as throughout the United States. Highlights of 2017 include Ravel’s Concerto in G with the Boston Pops and Keith Lockhart in Boston’s Symphony Hall, Poulenc’s “Aubade” with San Diego Winds, recitals with Stephanie Houtzeel of the Vienna State Opera, and residencies with the Conservatorios Nacionales Superiores of Sevilla and Jaén in Spain. Current projects include a recording of the music of Manuel Ponce and performances of Milbauer’s “Which Side Are You On?” program based on themes of protest, immigration, and workers’ rights. France’s “Republique du Centre” has called him “a virtuoso of the first magnitude” while “American Record Guide” wrote, “Milbauer employs a full expressive range, performs with astounding delicacy, and conveys unspeakable wonder through an intimate touch and astonishing versatility.” A laureate of the Orléans Concours in France for piano music of the 20th century, he has performed concerts devoted only to chance music and enjoys playing music that employs electronic sounds, prepared piano, extended techniques, and graphic notation; in a similar vein, he has contributed a chapter on the performance of the music of John Cage to “The Pianist’s Craft” series. A versatile musician, Milbauer has performed with the Mills Brothers and Pink Martini, and has a discography that includes a release with violinist David Garrett that has over 250,000 views on YouTube.

Milbauer studied music, classics, and government at Harvard College before earning degrees from the Eastman School of Music, The Juilliard School, Manhattan School of Music, and, as recipient of a Fulbright grant, the Liszt Academy in Budapest. He was awarded the Eastman Performer’s Certificate (the highest performance honor of the school) and the Wolodarsky Prize from the Banff Centre, and was nominated for the Gina Bachauer prize for outstanding pianist at Juilliard. His teachers include Jerome Lowenthal, Ferenc Rados, György Sebök and Rebecca Penneys. Since 2012 he has been co-director of the Chautauqua Piano Program, helping to transform it into one of the premier summer piano programs in the Americas.

Posted by University of Arizona Voice and Opera Theater on Tuesday, January 23, 2018 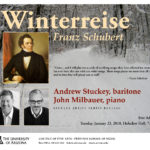