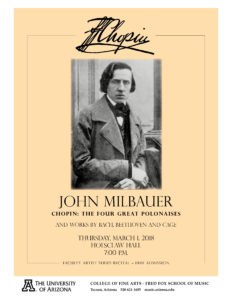 The Faculty Artist Series at the University of Arizona Fred Fox School of Music presents pianist John Milbauer in a recital titled “Chopin: The Four Great Polonaises.” The free-admission performance will be held at 7:00 p.m. in Holsclaw Hall on Thursday, March 1, 2018.

Milbauer‘s program will include the “Military” Polonaise, the “Tragic” Polonaise, the “Heroic” Polonaise, and the Polonaise-Fantasie, as well as selected Mazurkas and works by J.S. Bach, John Cage, and Beethoven. Please note that the recital program has changed from what was previously advertised in the 2017-2018 “Music On Campus” season brochure.

Steinway Artist John Milbauer has recently performed in Brazil, Colombia, Costa Rica, Mexico, Spain, Switzerland and Japan as well as throughout the United States. Highlights of the past season include Ravel’s Concerto in G with the Boston Pops and Keith Lockhart in Boston’s Symphony Hall, an interactive media/music collaboration with MIT’s media lab, Poulenc’s “Aubade” with San Diego Winds, recitals with Stephanie Houtzeel of the Vienna State Opera, and residencies with the Conservatorios Nacionales Superiores of Sevilla and Jaén in Spain. Current projects include performances of Milbauer‘s “Which Side Are You On?” program based on themes of protest, immigration, and workers’ rights. A 2017 review in Sevilla said “this extraordinary program makes you discover that music reminds us that we all can be refugees, exiles, and immigrants…and John Milbauer says this through the keys of the piano.”

France’s Republique du Centre has called him “a virtuoso of the first magnitude” while American Record Guide wrote, “Milbauer employs a full expressive range, performs with astounding delicacy, and conveys unspeakable wonder through an intimate touch and astonishing versatility.”

A laureate of the Orléans Concours in France for piano music of the 20th Century, he has performed concerts devoted only to chance music and enjoys playing music that employs electronic sounds, prepared piano, extended techniques, and graphic notation; in a similar vein, he has contributed a chapter on the performance of the music of John Cage to “The Pianist’s Craft” series. A versatile musician, Milbauer has performed with the Mills Brothers, violinist David Garrett, and Pink Martini.

Milbauer studied music, classics, and government at Harvard College before earning degrees from the Eastman School of Music, The Juilliard School, Manhattan School of Music, and, as recipient of a Fulbright grant, the Liszt Academy in Budapest. He was awarded the Eastman Performer’s Certificate and the Wolodarsky Prize from the Banff Centre, and was nominated for the Gina Bachauer prize for outstanding pianist at Juilliard. His teachers include Jerome Lowenthal, Ferenc Rados, György Sebök, and Rebecca Penneys.

Currently professor of piano and coordinator of the keyboard area at the University of Arizona Fred Fox School of Music, Dr. Milbauer has been co-director of the Chautauqua Piano Program with Nicola Melville since 2012, helping to transform it into one of the premier summer piano programs in the Americas. An avid backpacker, Milbauer has led more than a dozen backcountry tours through Grand Canyon, most recently a solo hike on the Tanner and Beamer Trails. 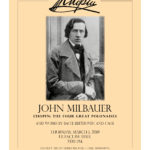