Professor Katzen’s annual solo horn recital will commemorate his decade-plus tenure as professor of horn at the University of Arizona. Professor Katzen will be retiring from his position as of May 2018. Daniel Katzen is delighted that his mentor and former teacher, Fred Fox, will be the guest of honor at his retirement recital at the University of Arizona.

“I have had the great fortune of playing in the Boston Symphony for 30 years and now with the students and faculty of the University of Arizona for an additional 11 years.” His program will turn back the clock to his first solo recital in 2008. Bartók’s “Romanian Folk Dances” with pianist Michael Dauphinais and Bach’s sixth and final cello suite will be followed by Benjamin Britten’s haunting and powerful Serenade for tenor, horn and strings. Thomas Cockrell will conduct an orchestra of TSO and UA strings. The tenor is James Stevens, from George Mason University.

During Katzen‘s early tenure at UA, he wanted his students to experience the great benefits from the wisdom of master horn teacher Fred Fox, so he invited him to come to Tucson. Mr. Fox’s visits became a yearly routine, extending his teaching to other brass and woodwind instrumentalists. Besides master classes open to all, students would line up outside Katzen‘s studio for lessons with Fred Fox. Occasionally, Katzen would travel to Los Angeles with a small group of students to receive additional instruction from Mr. Fox, who at the time was approaching his 100th birthday.

Professor Katzen‘s long-time friendship with Fred Fox was the motivation that brought the Fox family to the UA School of Music. Katzen says, “I met Fred when he was ‘old’: 62! He had just stopped working in the Hollywood film studios and started to devote his energies towards teaching young players. I was 24 at the time and was introduced to him through a mutual colleague, James Thatcher. The lessons we enjoyed were of seminal importance to me, in that thisteacher (among my seven) was giving me the bare basics of horn playing in a way that stuck with me. The technical issues I had been having simply disappeared, so much, that, when I went to the audition for the Boston Symphony, the information came along with me. I got the job!”

“These generous gifts have been transformative for the school and members of the Fox family continue to be great friends and regular visitors to our school,” said Professor Katzen.

Daniel Katzen joined the University of Arizona School of Music faculty after finishing his 29th year as second horn of the Boston Symphony Orchestra, a position he held from 1979 to 2008. Prof. Katzen’s studies and performance career have taken him to 25 U.S. states and 22 foreign countries on five continents to perform more than 5000 concerts. He can be heard live in concert at his annual UA solo and chamber recitals, various orchestral appearances around the United States and on his dozens of CDs with the Boston Symphony and Boston Pops Orchestras, Empire Brass and other orchestral and chamber ensembles. His three CDs of Bach Suites for ‘Cello Solo played on the horn and his publications of the transcriptions are unique and have already sold out the first printing. In addition to his tenure in the BSO, Katzen was a faculty member at Boston University College of Fine Arts, New England Conservatory and Tanglewood Music Center in the East, and California Institute of the Arts and University of California/Irvine School of Music in the West. His previous orchestral affiliations include fourth horn with the San Diego Symphony, second horn in both the Grant Park (Chicago) and Phoenix Symphonies, and extra horn with the Chicago Symphony and the Munich, Los Angeles and Rochester Philharmonics. He can also be heard on the soundtracks of more than two-dozen motion pictures, including “E.T.,” “Nixon,” “Pearl Harbor,” “Twister” and “Jumanji.” Prof. Katzen concertizes on a customized horn made for him in 1980 by Dan Rauch. 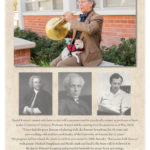