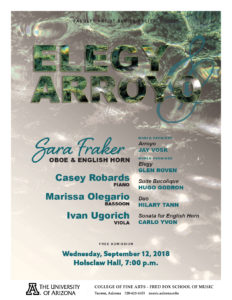 Elegy for Oboe and Piano, Op. 64 *
suggested by California during the Gulf War by Denise Levertov
Glen Roven (1957-2018)

Dr. Sara Fraker is assistant professor of oboe at the University of Arizona and a member of the Tucson Symphony Orchestra. She spends her summers in residence as a faculty artist at the Bay View Music Festival in northern Michigan. Sara is also principal oboist of True Concord Voices & Orchestra, which recently made their Lincoln Center debut; the ensemble also garnered two Grammy nominations for their 2015 CD release “Far In The Heavens,” on which Sara is a featured soloist.

Sara held the Gillet Fellowship at the Tanglewood Music Center and was a participant in the Tanglewood Bach Seminar. She has also performed at the Aspen Music Festival, Shenandoah Valley Bach Festival, Chautauqua, Spoleto Festival USA, and the prestigious Schleswig-Holstein Orchestral Academy in Germany. Sara has played with numerous orchestras, including the Phoenix Symphony, Arizona Opera, Broadway in Tucson, St. Andrews Bach Society, Tucson Pops, Illinois Symphony, Champaign-Urbana Symphony, Brockton Symphony, Newton Symphony, New Bedford Symphony, Gardner Chamber Orchestra, and Sinfonia da Camera. Sara has presented recitals at four recent conferences of the International Double Reed Society, including Tokyo and New York City. She performs regularly as a member of the Arizona Wind Quintet and has given master classes at universities and performing arts schools across the United States and in Australia.

Pianist and vocal coach Casey Robards is known for her artistry, versatility and sensitive musicality. Casey has given recitals with singers and instrumentalists throughout the United States, as well as Europe, Central and South America and Asia. Casey regularly performs a variety of genres including solo and chamber instrumental music, art song, opera, musical theatre, the Negro spiritual, gospel, and newly composed works.

Recent engagements include recitals across the United States with Ollie Watts Davis, LaToya Lain, Cherry Duke, Nathaniel Hackmann, Andrew Pelletier, Hai Xin Wu, Fangye Sun, Carrie Pierce, Donna Shin, an engagement with the Alma Symphony playing the Rachmaninoff Piano Concerto No. 2 and numerous instrumental and vocal faculty recitals at Central Michigan University where Dr. Robards is currently a lecturer in collaborative piano. Casey is interested in the intersection of music and social justice and has led benefit recitals for Musicambia, a non-profit organization that creates music conservatories in prisons, and recently recorded a CD of art songs “Come Down Angels: works by women composers” with tenor Henry Pleas.

Dr. Robards holds degrees in piano performance, piano pedagogy and vocal coaching and accompanying from the University of Illinois. She received the Henri Kohn Memorial Award at Tanglewood and attended the 2015 Songfest Professional Development Program for College Teachers.

As an avid chamber musician, Ivan Ugorich has won the McCauley Chamber Music Competition with his quartet in 2012, and has been selected to compete in the International Chesapeake Chamber Music Competition as a 2016 finalist with the Cerulean Trio. He has also performed with his two groups on the radio with WUOL 90.5 and WFSQ 91.5 respectively. In May he will appear with his trio in Carnegie Hall as part of a program titled “Home and Abroad.”

Ugorich has performed with orchestras including the Sarasota Orchestra, the Florida Orchestra, and the Orlando Philharmonic. Additionally, he won the position of principal violist with Symphony Orchestra Augusta, where he served from 2014 to 2016. Other performance opportunities have taken him to Germany, France, Spain, Poland, Denmark, and China. Engagements have included performances with notable artists such as Itzhak Perlman, Joshua Bell, Lang-Lang, Anne-Sophie Mutter, Midori, Guy Braunstein, Boston Pops, Pink Martini, and Time for Three. He also has had experience as a soloist winning three solo competitions. Ivan earned a bachelor’s degree in performance from Indiana University Jacobs School of Music and a master’s degree from Florida State University. He has been a member of the staff at the University of Arizona Fred Fox School of Music since August 2016.