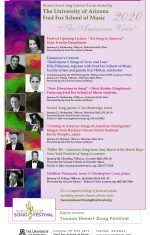 Admission is free, but seating in Holsclaw Hall is limited to 200. Advanced reservations are accepted:

Richard Danielpour, one of America’s most important composers of his generation, is the first composer to be commissioned by the TDSF through the Wesley Green TDSF Composer Project. This concert will feature the première of Danielpour’s set of songs based on ancient Persian texts, “Songs of Love and Loss (Five Songs on Poems of Rumi),” which was written for his friend, renowned Israeli soprano Hila Plitmann. The work will be performed with Fred Fox School of Music string faculty, conducted by Eric Holtan.

Founded in 1975, the Arizona Wind Quintet performs regularly on campus and in the community and has toured throughout the western states. Members of the quintet are FFSoM faculty Brian Luce, flute; Sara Fraker, oboe; Jackie Glazier, clarinet; Johanna Lundy, horn; and Marissa Olegario, bassoon.

Award winning composer Richard Danielpour has established himself as one of the most gifted and sought-after composers of his generation. His list of commissions includes works written for some of the most celebrated artists of our day. He is the first composer to be commissioned through the Wesley Green TDSF Composer Project.

Since founding True Concord Voices and Orchestra, Eric Holtan has conducted performances of many of the most significant choral works in the canon and has commissioned some of America’s leading composers for world premiere performances. A native of Minnesota, Holtan holds a Doctor of Musical Arts degree from the University of Arizona.

Violinist Melisa Karić has performed with ensembles at numerous festivals across Europe. After graduating with honors from University of Sarajevo, with Violeta Smailovic, she continued her studies in CSM Vigo in Spain with Mario Peris. Currently, she is pursuing a masters degree with Timothy Kantor at the University of Arizona.

Cecilia Palma is a member of Duo Villa-Lobos (cello and guitar), with whom she made her debut CD for Naxos. She is a cello faculty at the Universidad Nacional de Colombia and a cellist of the Orquesta Filarmónica de Bogotá. Currently, she is completing her DMA at the University of Arizona.

Grammy award-winning vocalist and actress Hila Plitmann is a glittering jewel on the international music scene, known worldwide for her astonishing musicianship, light and beautiful voice, and the ability to perform challenging new works. She has a black belt in Tae Kwon Do and lives in Los Angeles.

Lauren Roth is concertmaster of the Tucson Symphony Orchestra and assistant professor of violin at the University of Arizona. A native of Seattle, Roth received Bachelor of Music and Bachelor of Arts degrees from the University of Washington. Outside of music, Roth enjoys sports, yoga and spending time with her nieces and nephews.

Award-winning violist Tiezheng Shen, student of Hong-Mei Xiao at the University of Arizona, recently made his solo debuts at Carnegie Hall and Wiener Saal Mozarteum in Salzburg as a winner of international competitions. He is the director and founder of the Viola Voice International Viola Festival in Mexico City.

Raiden Thaler is pursuing a Master of Music degree at the at the UA Fred Fox School of Music under the tutelage of Dr. Molly Gebrian. He is principal viola of the Arizona Symphony Orchestra and a new member of the University of Arizona Graduate String Quartet under the mentorship of Professor Tim Kantor.

A native of China, Xiaodi Xu is completing her fourth year of study as a doctoral student in harp performance at the Fred Fox School of Music. As an instrumental performer, she has extensive experience in the genres of opera, and chamber and orchestral music.

Cellist Diana Yusupov graduated from Queensland Conservatorium of Music in 2009. She has won a number of competitions, including the Frances Walton Competition and the Fred Fox School of Music Concerto Competition. Diana is currently a doctoral student at the University of Arizona, where she is a member of the Graduate String Quartet.

A highly sought-after pianist, Dean Zhang serves as principal keyboardist of the Tucson, Canton, and Southwest Florida Symphonies. He has been a featured soloist with each of his orchestras as well as the National Repertory Orchestra and New World Symphony. Dr. Zhang teaches at the historic New England Music Camp.