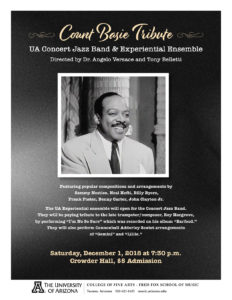 The Concert Jazz Band will present an “All Basie” concert on Saturday, December 1, 2018 at 7:30 p.m. in Crowder Hall. This is the third jazz area performance of the academic year under the direction of Dr. Angelo Versace and Tony Belletti. Popular compositions and arrangements by Sammy Nestico, Neal Hefti, Billy Byers, Frank Foster, Benny Carter, John Clayton Jr. will be featured on the concert.

The UA Experiential ensemble will open for the Concert Jazz Band. They will be paying tribute to the late trumpeter/composer, Roy Hargrove, by performing “I’m No So Sure” which was recorded on his album “Earfood.” They will also perform Cannonball Adderley Sextet arrangements of “Gemini” and “Lillie.”