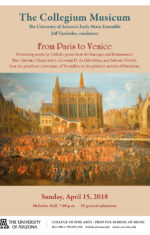 The University of Arizona’s early music ensemble, Collegium Musicum, presents its spring concert on Sunday, April 15, 2018 at 7:00 p.m. The program presents works by a number of Catholic greats from the Baroque and Renaissance: Marc-Antoine Charpentier, Giovanni P. da Palestrina and Antonio Vivaldi. The program features the rich variety of Catholic music of the time, from the grandiose court music of Versailles, to the plaintive motets of Palestrina.

Jeff Vanderlee is a second-year doctoral student in choral conducting with a minor in orchestral conducting under the mentorship of Dr. Bruce Chamberlain, Dr. Elizabeth Schauer and Dr. Thomas Cockrell. The 2017- 2018 academic year marks Jeff’s first year as director of Collegium Musicum. He is an active and diverse musician, conducting the University of Arizona Honor Choir, performing with the Arizona Choir and Arizona Baroque, as well as accompanying with various high school and community groups across the Tucson area. Jeff also serves as choral director at the Good Shepherd United Church of Christ in Sahuarita, Arizona.

Throughout his schooling and teaching career, Jeff has had a special connection with and affinity for early music. Performing in the Bach Cantata Project at the Butler School of Music, the Texas Early Music Project, and Ensemble Settecento, provided him with formative experiences, and ignited within him a passion for performing and teaching music of the Baroque and Renaissance. He is excited to work with Collegium Musicum, and present the Fall 2017 program, “Deliverance.”