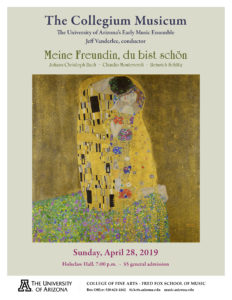 Jeff Vanderlee is a third-year doctoral student in choral conducting with a minor in orchestral conducting under the mentorship of Dr. Bruce Chamberlain, Dr. Elizabeth Schauer and Dr. Thomas Cockrell. The 2018-2019 academic year marks Jeff’s second and final year as director of Collegium Musicum. He is an active and diverse musician, performing with the Arizona Choir and Arizona Baroque, as well as accompanying with various high school and community groups across the Tucson area. Jeff also serves as choral director at the Good Shepherd United Church of Christ in Sahuarita, Arizona.

Throughout his schooling and teaching career, Jeff has had a special connection with and affinity for early music. Performing in the Bach Cantata Project at the Butler School of Music, the Texas Early Music Project, and Ensemble Settecento provided him with formative experiences, which ignited within him a passion for performing and teaching music of the Baroque and Renaissance.

Being that this is his final semester with the ensemble, Jeff would also like to extend a heartfelt thank you to the singers and instrumentalists that have participated with Collegium Musicum over the past four semesters. Each concert program has been an absolute joy to realize, and he is grateful to his mentors for the opportunity to work with them.