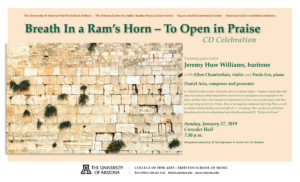 In “Breath in a Ram’s Horn: The Jewish Spirit in Classical Music,” composer Daniel Asia talks about the profound relationship between classical music and Judaism and extrapolates to the larger spiritual realm. Also included are performances of Asia’s music, particularly works that are inspired by Jewish texts: Psalms, those of his long-time collaborator poet Paul Pines, as well as Yehuda Amichai and the universal texts of E.E. Cummings. Pieces performed will include those featured on his recently released and critically acclaimed CD, “To Open In Praise.

The Welsh baritone Jeremy Huw Williams studied at St John’s College, Cambridge, at the National Opera Studio, and with April Cantelo. He made his debut with Welsh National Opera as Guglielmo (“Così fan tutte”) and has since appeared in more than sixty operatic roles. He has given performances at major venues in North and South America, Australia, Hong Kong, and most European countries. He is renowned as a fine exponent of contemporary music, having commissioned much new music. He frequently records for BBC Radio 3, and has made many commercial recordings, including ten solo discs of songs.