Home › News & Events › Events › “Bassoon and Friends,” a recital for Dr. William Dietz, celebrating 35 years at the University of Arizona 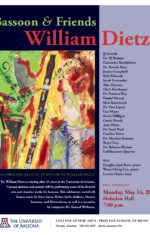 Professor of bassoon Dr. William Dietz is retiring after 35 years at the University of Arizona. In honor of his tenure, former students will be returning to perform some of his favorite solo and chamber works for bassoon alongside his current students. This celebratory recital will take place at 7:00 p.m. in Holsclaw Hall on Monday, May 14, 2018. For more information about this event, please contact JJ Arévalo, arevalo@email.arizona.edu.
Alumni performing for this recital include Dr. Dan Lipori (professor of bassoon, Central Washington University), Dr. Scott Pool (professor of bassoon, Texas A&M – Corpus Christi), Dr. Rebecca Watson (assistant professor of music education and double reeds, The Liberty University School of Music), Dr. BJ Bedont, Dr. Maralyn Sommer, Matt Kowalczyk, Lisa Mayer, Lauren Hayes, Sierra Norris, Alisa Hanson, Dr. Brenda Buys and Cassandra Bendickson. Current students performing for this recital are JJ Arévalo, Jacob Fernandez, Daniel Hursey, Kevin Milligan, Curtis Novak and Candice Sierra.
The program will feature music by Saint-Saëns, Weber, Faith, Addison, Duarte, Tansman and Weissenborn, as well as a premiere by Dr. Samuel Wellman, which was commissioned by an international consortium of Dr. Dietz’s former students and friends. Joining these bassoonists will be pianists Woan-Ching Lim and Douglas-Jayd Burn, as well as harpist Lauren Hayes.
Tucson based LuftBassoons Quartet will start the evening with an energetic performance of “Four Miniatures for Four Bassoons” by John Addison.
The program of solo works for bassoon will include Alexandre Tansman’s “Sonatine for Bassoon and Piano,” performed by Rebecca Watson with Wan-Ching Lim Lim on piano. Scott Pool will perform Carl Maria von Weber’s “Bassoon Concerto in F Major, Op. 75” with Douglas-Jayd Burn on piano. Burns will also accompany JJ Arévalo on a work especially written for Dr. Dietz by former UA professor of piano Richard Faith, titled “Suite for Bassoon and Piano.”
Harpist Lauren Hayes returns to accompany frequent collaborator BJ Bedont to delight us with their imaginative performance of the “Sonata for Bassoon and Piano” by Camille Saint-Saëns. Hayes will also perform “Sicilienne Variée,” a solo piece for harp, by J.M. Damase.
Dan Lipori performs two unaccompanied works, “Harkening” by Ryan Hare and “Godfather of Soul” by Gregory Yasinitsky.
Following, alumni and current students will form several ensembles to perform Upliano Duarte’s “Piangüita,” Bill Douglas’ “Bassango,” and “Imágenes,” a work premiered and commissioned by William Dietz from Costa Rican composer Vinicio Meza.
A final collaboration of all alumni and current students in attendance will close this lively program with the world premiere of “Bocalise” from composer Samuel Wellman, written for this occasion as a tribute to Dr. William Dietz.
About William Dietz:
William Dietz, professor of bassoon and wind chamber music and coordinator of woodwind activities, has served on the University of Arizona faculty since 1983. He is a member of the Arizona Wind Quintet and Trio Arizona (oboe, bassoon, piano). Both faculty ensembles perform regularly on campus and at national and international venues.
Dietz studied at West Virginia University, the University of Washington, and received the Doctor of Music degree in bassoon performance from Florida State University, where he studied with William Winstead. Dietz has served as principal bassoonist with various orchestras, including the Orquesta Sinfónica Nacional de Costa Rica, the Flagstaff Festival of the Arts Orchestra, and theArizona Music Fest Orchestra. In addition, he was a member of the Tucson Symphony Orchestra for 16 seasons. As a recitalist and chamber musician he has performed throughout the United States, Canada, Mexico, Central and South America, and in Europe.
Dr. Dietz has premiered numerous works at the annual conferences of the International Double Reed Society, and in 1994 he released a compact disc titled “New Works for Bassoon.” As an author he has contributed numerous articles to such professional periodicals as the “Journal of the International Double Reed Society,” the “National Association of Wind and Percussion Instructors Journal,” “Bandworld,” “The Instrumentalist,” and the “Dialogue in Music Education Journal.” He also served as the coordinating editor and author of the bassoon portion of  “Teaching Woodwinds” (Schirmer), a text designed for collegiate wind studies, which is used in music programs around the country. 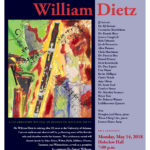