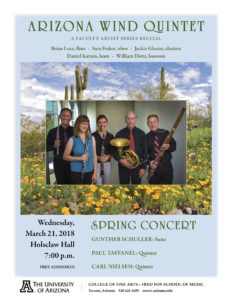 Founded in 1975, the Arizona Wind Quintet performs regularly on campus and in the community, and has toured throughout the western states, including a recital at the national meeting of the Music Educators National Conference. The group has developed an educational focus in its performance schedule, traditionally inviting students from the Fred Fox School of Music at the University of Arizona to join it in performances of expanded wind ensemble works during its spring semester program.  Members of the Arizona Wind Quintet are traveling to Mexico City to perform and teach at Universidad Autónoma de México, Facultad de Música, February 24-March 2, 2018. This tour is part of a partnership between the Fred Fox School of Music and Centro de Estudios Mexicanos – UNAM Tucson.

BRIAN LUCE, “an authoritative soloist” praised for his “technical agility” and “lyric power,” has been principal flute of the Champaign-Urbana, Midland-Odessa, and Johnstown symphony orchestras and has performed with the Dallas Chamber Orchestra, Dallas Bach Society, Dallas Wind Symphony and Tucson Chamber Orchestra. He performs recitals and concertos while presenting master classes worldwide. He holds prizes from the National Flute Association, Myrna Brown, Mid-South, and Kingsville young artist competitions. His compositions and arrangements are available from G. Schirmer and Editions BIM, and his articles have appeared in “Flute Talk.” Dr. Luce is a Yamaha Performing Artist and has played these flutes exclusively since 1996.

SARA FRAKER is a member of the Tucson Symphony Orchestra, principal oboist of True Concord Voices and Orchestra, and a faculty artist at the Bay View Music Festival in Michigan. She has performed in festivals at Tanglewood, Aspen, Shenandoah Valley Bach Festival, Chautauqua, Spoleto Festival USA and Schleswig-Holstein in Germany. Dr. Fraker has presented recitals at four recent International Double Reed Society conferences including Tokyo and New York City, and has given master classes at universities and performing arts schools across the United States and in Australia. She is a graduate of Swarthmore College, New England Conservatory and the University of Illinois.

A versatile artist, JACKIE GLAZIER is an active soloist, chamber musician, orchestral clarinetist, pedagogue, and advocate of new music. She recently premiered Scott McAllister’s “Concerto Americana” for clarinet and saxophone with the University of Florida Wind Symphony. An accomplished chamber musician, Jackie was selected as a finalist in the international 2016 Chesapeake Chamber Music Competition with the Cerulean Trio. Dr. Glazier has performed regularly with the Orlando Philharmonic as principal, second, and e-flat clarinet for the past five seasons, and was principal clarinet of the Ocala Symphony from 2012 to 2016. Jackie was the 2014 winner of the International Clarinet Association Orchestral Competition.

DANIEL KATZEN came to the University of Arizona after finishing his 29th year as second horn of the Boston Symphony Orchestra, a position he held from 1979 to 2008. Prof. Katzen’s studies and performance career have taken him to 25 U.S. states and 22 foreign countries on five continents to perform more than 5000 concerts. He can be heard live in concert at his annual UA solo and chamber recitals, various orchestral appearances around the United States and on his dozens of CDs with the Boston Symphony and Boston Pops Orchestras, Empire Brass and other orchestral and chamber ensembles. In addition to his tenure in the BSO, Prof. Katzen was a faculty member at Boston University College of Fine Arts, New England Conservatory and Tanglewood Music Center in the East, and California Institute of the Arts and University of California/Irvine School of Music in the West. His previous orchestral affiliations include fourth horn with the San Diego Symphony, second horn in both the Grant Park (Chicago) and Phoenix Symphonies, and extra horn with the Chicago Symphony and the Munich, Los Angeles and Rochester Philharmonics. He can also be heard on the soundtracks of more than two-dozen motion pictures. Prof. Katzen concertizes on a customized horn made for him in 1980 by Dan Rauch.

Bassoonist WILLIAM DIETZ has been a member of various ensembles, including the Tucson Symphony, the Orquesta Sinfónica Nacional de Costa Rica, the Tallahassee Symphony, and the Arizona Musicfest Orchestra. He has performed recitals throughout the United States, Canada, Mexico, Central and South America, and in Europe. His compact disc, “New Works for the Bassoon,” includes several works written for him. Dr. Dietz is the senior author and editor of “Teaching Woodwinds,” a text designed for collegiate woodwind techniques classes. His doctorate in bassoon performance was earned from Florida State University where he studied with renowned bassoonist William Winstead. At the University of Arizona he teaches bassoon, chamber music and performs with the Arizona Wind Quintet. 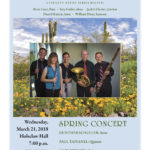