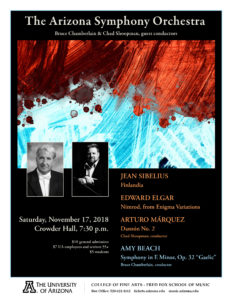 The Arizona Symphony Orchestra will present a concert on Saturday, November 17, 2018 at 7:30 p.m. in Crowder Hall. This concert’s program will include Sibelius’s “Finlandia” and Symphony No. 2 “Gaelic” by American composer Amy Beach, as well as the popular “Danzón” by Arturo Márquez and a selection from Elgar’s “Enigma Variations.” Dr. Bruce Chamberlain and Professor Chad Shoopman lead the Arizona Symphony in this program while Dr. Thomas Cockrell is on sabbatical during the fall 2018 semester.

BRUCE CHAMBERLAIN, professor emeritus of music at the University of Arizona, retired in May 2018 after 41 years as a director of choral activities in higher education. This legacy includes Trinity University (Texas), Murray State University (Kentucky), the University of Northern Iowa and the University of Arizona’s Fred Fox School of Music, where he also served as the associate director. During his distinguished career he has conducted choirs with numerous international orchestras in the world’s finest concert venues, including the Musikverein in Vienna, the Rudophinum in Prague, the Liszt Academy in Budapest, The Art Hall in Seoul, Jerusalem Theatre in Israel, Avery Fisher Hall in Lincoln Center and New York City’s Carnegie Hall. His choirs have given performances at national and regional conferences of the American Choral Directors Association, the American Guild of Organists and the National Association for Music Education. Since arriving at the University of Arizona in 2000, his graduate students have been finalists and/or winners of the ACDA National Conducting Competition seven times in row. He has over 65 DMA/MM students conducting and teaching in colleges/universities, secondary schools, churches, professional and community choirs in the United States and on five of the seven continents.

His distinguished teaching career has been recognized by the University of Arizona as the winner of the Fred Fox School of Music Maestro Award recognizing outstanding student achievement, the College of Fine Arts James R. Anthony Award for Sustained Excellence in Teaching and the University of Arizona Humanities Seminars Program’s Shirley and Ted Taubeneck Outstanding Teacher Award for his course on the Russian ballets of Igor Stravinsky which led to sold out performances of “Les Noces” with the UA School of Dance. This record of outstanding pedagogy has led to summer faculty appointments at the Varna International Academy in Bulgaria and the International Conducting Institute at the Westminster Choir College.

Professionally Bruce has been the music director of the San Antonio Symphony Mastersingers, the Monroe Symphony Orchestra (Louisiana) and continues as the director of the Tucson Symphony Orchestra Chorus which he founded in 2003. The TSOC has given critically acclaimed performances of “Messiah,” Beethoven Symphony No. 9 and “Missa Solemnis,” Berlioz “La damnation de Faust,” Mozart Requiem, Brahms “Ein deutsches Requiem,” Bernstein “Kaddish” and Orff “Carmina Burana.” He has also collaborated with virtually every major arts producer in Tucson including UA Presents, Artifact, TSO and landmark performances of Martin’s Mass, Mendelssohn’s “Elijah” and a blockbuster Verdi Requiem with True Concord.

Bruce and his wife, Peggy, enjoy traveling, but always look forward to returning to their home in Oro Valley and spending time with their adult children and granddaughter.

CHAD SHOOPMAN is the associate director of bands and director of athletic bands at the University of Arizona. His duties include conducting the UA Wind Symphony, directing The Pride of Arizona Marching Band and Pep Band, as well as teaching leadership and marching band techniques courses.

Prior to his current appointment, Shoopman was a distinguished adjunct faculty member at Rollins College in Winter Park, Florida where he taught film music history, trumpet and conducting. He worked for the Walt Disney World Company conducting and performing on countless multi-million dollar studio projects for Walt Disney World, Tokyo Disneyland, Disneyland Paris and Disney Cruise Lines. He also worked as a conductor, performer, arranger, and choreographer for live shows seen by millions of guests throughout Walt Disney World including FutureCorps, the Tomorrowland Countdown, the Main Street Philharmonic and Disney’s Candlelight Processional. As the most requested clinician for Disney Performing Arts (formerly Magic Music Days), he was honored to lead thousands of educational workshops for middle school, high school and college bands and orchestras from all over the world.

In 2010, Shoopman was appointed music director and conductor of the Brass Band of Central Florida. Under his baton, the BBCF won a national championship, recorded three albums, and earned the ranking of 13th best brass band in the world; the highest placement any band outside of Great Britain has ever achieved. He was known for innovative show designs and arrangements that appealed to a wide range of audiences while still maintaining artistic integrity in the ever growing American brass band movement.