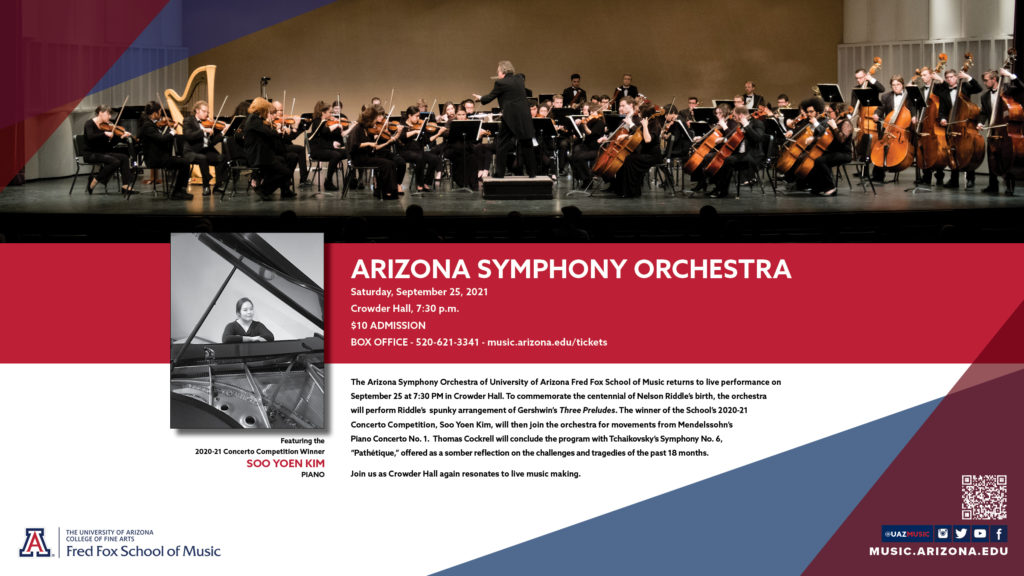 The Arizona Symphony Orchestra of University of Arizona Fred Fox School of Music returns to live performance on September 25 at 7:30 PM in Crowder Hall. To commemorate the centennial of Nelson Riddle’s birth, the orchestra will perform Riddle’s spunky arrangement of Gershwin’s Three Preludes. The winner of the School’s 2020-21 Concerto Competition, Soo Yoen Kim, will then join the orchestra for movements from Mendelssohn’s Piano Concerto No. 1. Thomas Cockrell will conclude the program with Tchaikovsky’s Symphony No. 6, “Pathétique,” offered as a somber reflection on the challenges and tragedies of the past 18 months. Join us as Crowder Hall again resonates to live music making. 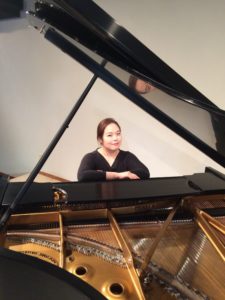 SooYoen Kim enjoys a diverse career as a soloist, chamber musician, accompanist, orchestral player, and music educator. She has performed recitals at prestigious venues such as Carnegie Hall and Steinway Hall in New York and Centennial Hall in Tucson. She was one of the soloists of the Chopin 200th Anniversary Gala Concert at the World Financial Center, New York, and the opening concert at the Italy Music Festival in Lucca, Italy. She won the First Prize in the American Protégé International Piano Competition 2014 at Carnegie Hall in New York. In 2012, she was invited to participate the International Bösendorfer Piano Competition and the Second Prize Winner of the Louis Trester Competition 2014, Arizona, and the winner of the Duquesne’s Concerto Competition 2011 in Pittsburg. Before coming to the United States, she was the First Prize winner at the Korean Youth Piano Competitions. Soo Yoen received a bachelor’s degree in music from Yonsei University, Seoul, South Korea, a master’s degree in music from the Mannes School of Music, the New School, New York, and an Artist Diploma from Duquesne University, Pittsburgh. She worked as a teaching assistant at Duquesne University and the University of Arizona, and as an accompanist for the University of Arizona Opera Production, and Arizona Choir. Soo Yoen is currently studying with Dr. John Milbauer and finishing a doctoral program at the University of Arizona.

Dr. Thomas Cockrell has served as the Nelson Riddle Endowed Chair in Music, director of orchestral activities at the University of Arizona since 2000. He is also the artistic director of Opera in the Ozarks at Inspiration Point, a summer festival in Eureka Springs, Arkansas. Cockrell has conducted the professional symphony orchestras of Dallas, Cincinnati, Phoenix, Tucson, Louisville and Boulder, as well as several in Romania, Italy, Mexico and South Korea. Operatic credits include productions for Dayton Opera, Opera Colorado, Opera Theatre of the Rockies and Washington D.C.’s Summer Opera Theatre. He served as the associate conductor of Cincinnati Opera, Opera Colorado, The Colorado Symphony Orchestra and the Spoleto Festivals, music director of Denver Young Artists Orchestra, and interim conductor of the Phoenix Youth Symphony. He was a member of the conducting faculty of the Interlochen Arts Camp from 2006 to 2008. While on sabbatical leave fall 2018 he served as a guest professor in Mexico City at Universidad Autónoma de México/Facultad de Música, with which the Fred Fox School of Music has recently established a promising partnership.

Cockrell earned his Doctor of Musical Arts and Master of Music degrees from the State University of New York at Stony Brook and a Bachelor of Arts from Yale University. He studied conducting with Franco Ferrara in Rome and at L’Accademia Musicale Chigiana in Siena, Italy. Additionally, he was an Aspen Conducting Fellow and completed advanced training at the Conservatoire Américain in Fontainebleau, France and the Tanglewood Music Center, where he worked with Gustav Meier, Leonard Bernstein and Seiji Ozawa.