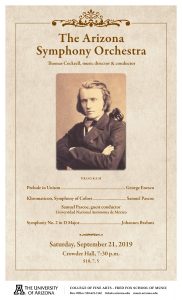 The Arizona Symphony welcomes Samuel Pascoe of Universidad Nacional Autónoma de México who will conduct his composition “Khromaticon.” Thomas Cockrell completes the program with George Enescu’s “Prelude in Unison” and Symphony No. 2 in D Major by Johannes Brahms. Dr. Pascoe’s visit is part of a continued partnership between the Fred Fox School of Music and Universidad Nacional Autónoma de México/Facultad Nacional de Música.

About the Guest Conductor/Composer:

As a composer, Pascoe wrote “Symphony of Peace” as his doctoral dissertation at Boston University. In 2016-2017 he was the composer in residence for the Vocal Essence Cantaré project in Minnesota. In 2016 he premiered “Cantos de Primavera”, a piece for soprano, tenor, choir and orchestra with texts of King Nezahualcóyotl in Náhuatl (the language of the Aztecs). In 2013 he composed “Khromaticon, Symphony of Colors.”  This piece was performed in Spain in May of 2015 during the Fifth International Symposium of Synaesthesia, Arts and Sciences. The Urtext label has recorded several of his works.

About the Music Director/Conductor:

Dr. Thomas Cockrell has served as the Nelson Riddle Endowed Chair in Music, director of orchestral activities and music director of the UA Opera Theater at the University of Arizona since 2000. He is also the artistic director of Opera in the Ozarks at Inspiration Point, a summer festival in Eureka Springs, Arkansas. Cockrell has conducted the professional symphony orchestras of Dallas, Cincinnati, Phoenix, Tucson, Louisville and Boulder, as well as several in Romania, Italy, Mexico and South Korea. Operatic credits include productions for Dayton Opera, Opera Colorado, Opera Theatre of the Rockies and Washington D.C.’s Summer Opera Theatre. He served as the associate conductor of Cincinnati Opera, Opera Colorado, The Colorado Symphony Orchestra and the Spoleto Festivals, music director of Denver Young Artists Orchestra, and interim conductor of the Phoenix Youth Symphony. He was a member of the conducting faculty of the Interlochen Arts Camp from 2006 to 2008. While on sabbatical leave fall 2018 he served as a guest professor in Mexico City at Universidad Autónoma de México/Facultad de Música, with which the Fred Fox School of Music has recently established a promising partnership.

Cockrell earned his Doctor of Musical Arts and Master of Music degrees from the State University of New York at Stony Brook and a Bachelor of Arts from Yale University. He studied conducting with Franco Ferrara in Rome and at L’Accademia Musicale Chigiana in Siena, Italy. Additionally, he was an Aspen Conducting Fellow and completed advanced training at the Conservatoire Americain in Fontainebleau, France and the Tanglewood Music Center, where he worked with Gustav Meier, Leonard Bernstein and Seiji Ozawa.

Recorded in the Jefferey Haskell Recording Studio in the Fred Fox School of Music building on 8/23/22.
... See MoreSee Less