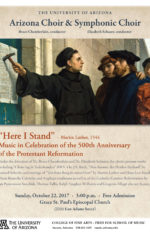 Arizona Choir and Symphonic Choir present music in celebration of the 500th anniversary of the Reformation. Under the direction of Dr. Bruce Chamberlain and Dr. Elizabeth Schauer, the program will include J.S. Bach’s poignant “Christ lag in Todesbanden” BWV 4 and Samuel Scheidt’s mellifluous “Nun Komm, der Heiden Heiland.” Settings of the well known Reformation chorale “Ein feste Burg ist unser Gott” by Martin Luther and Hans Leo Hassler are also included. The concert also features works from traditions that arose in response to the Lutheran Reformation, including Calvinism, Anglicanism, and the Counter-Reformation.

The Arizona Choir is the premier graduate choral ensemble at the University of Arizona Fred Fox School of Music. Internationally, the Arizona Choir has performed with the Budapest Chamber Orchestra at the famed Liszt Academy, the City of Prague Philharmonic in Vienna’s Musikverein and Prague’s Dvořák Hall. Convention appearances include ACDA, AGO, and AMEA. The Arizona Choir has partnered with professional touring groups including the Kronos Quartet and Ethel for performances on UA Presents concerts, with Tucson’s own Artifact Dance Project for a Tucson premiere of Menotti’s “The Unicorn, the Gorgon and the Manticore” and with True Concord for a performance of the Frank Martin Mass for Double Chorus, as well as Stravinsky’s “Les Noces” with the University of Arizona School of Dance.

Symphonic Choir, the select undergraduate ensemble at the University of Arizona, carries on a sixty six-year tradition of choral excellence. In addition to performing formal concerts on campus, on Tucson-area concert series, and on tours throughout the Southwest, the choir collaborates with university and professional ensembles, including on performances of Bach “Matthäuspassion” and Brahms “Ein deutsches Requiem” (University of Arizona), Mahler’s Symphony No. 2 (Tucson Symphony Orchestra and Chorus) and Mozart Requiem (University Community Chorus and Orchestra). Students represent a broad variety of disciplines and hail from throughout the United States. The group’s repertoire embraces music from many cultures and from every historical period up to and including premières of new works and those commissioned especially for the choir. The ensemble was recently honored to perform for the 2014 and 2010 Western Divisional Conferences of American Choral Directors Association, the 2012 Pacific-Southwest Regional Conference of College Music Society and the 2011 Annual Conference of Arizona Music Educators Association. In 2011, the ensemble also was awarded third place in the American Prize Choral Competition for the college/university division. Dr. Elizabeth Schauer, associate professor of music and associate director of choral activities, is in her fourteenth year as conductor of Symphonic Choir.

The opera orchestra will perform under the baton of Michael Dauphinais, music director. Cynthia Stokes is the stage director and Michael Dauphinais is vocal coach. The beautiful costumes and stage set are by Chris Allen and Sally Day respectively. The opera will be sung in English, and the total duration including intermission is approximately one hour and 55 minutes.

"Alana Wiesing is one of the few Black women timpanists to hold a principal position in a symphony orchestra. She hopes to change that and encourage others to break barriers—and the proverbial glass ceiling. A member of Local 33 (Tucson, AZ), Wiesing plays principal timpani in the Tucson Symphony Orchestra and also serves as an adjunct professor of percussion at the University of Arizona’s Fred Fox School of Music. She gains visibility in her role as an orchestra musician, but it is as an educator that she believes she can make the most impact."
... See MoreSee Less

Arizona Wind Quintet marks the 100th anniversary of this voting rights milestone with a retrospective of compositions by American women. Biographical vignettes accompany each short movement, as we feature a powerful cast of pioneering women from the early 20th century: Marion Bauer, Amy Beach, Johanna Beyer, Ruth Crawford Seeger, Mary Howe and Elinor Remick Warren. These musical gems, some rarely performed and unearthed from archival sources, are juxtaposed with an exciting new work, Soul on Fire, by UA faculty composer Dr. Yuanyuan (Kay) He, commissioned by AWQ for this occasion. Closing the program is music by the extraordinary composer Valerie Coleman, whose Portraits of Josephine suite is inspired by the life of Josephine Baker. The struggles Baker experienced parallel that of women of color to gain access to the ballot box. A full consideration of the history of women’s voting rights must acknowledge the ways BIPOC women were marginalized from the suffrage movement and the benefits of the 19th Amendment for decades beyond its ratification in 1920. Join us for this musical celebration of ingenuity, self-expression, boldness, and persistence. ... See MoreSee Less

About the audition, Ed said, "This audition was a whirlwind. I felt really grounded by the last time I took an audition, and being more comfortable with how I felt behind the screen. When the personnel manager told me that I had won, it felt unreal."

Ed is a current MM Student at the Fred Fox School and graduate of the University of Massachusetts Amherst, and the new 2nd bassoon for the West Valley Symphony. Through their time in New England, they enjoyed a rich performing and teaching career across various musical styles, including orchestral, chamber, musical theatre, and opera. Some of their fondest memories were playing alongside world-class soloists in the UMass Amherst Bach Festival’s St. Matthew Passion, and the inaugural performance of TUNDI’s Tristan und Isolde. In 2019, as an attendee at Rocky Ridge Music Center, their wind quintet placed first out of wind chamber groups at the annual chamber music competition. Edward served as the principal bassoon of the New England Film Orchestra, and on roster for the Firebird Pops Orchestra. Now studying under Marissa Olegario, they are excited to plant roots and establish themselves in the Southwest. When not playing bassoon, Ed likes to hang out with Spammy, their cat : ^ )