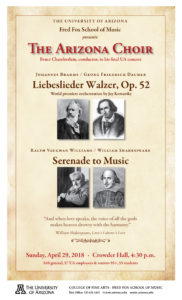 The Fred Fox School of Music presents the Arizona Choir, Bruce Chamberlain, conductor, in his final UA concert. The performance will take place at 4:30 in Crowder Hall on Sunday, April 29, 2018. The program includes “Liebeslieder Walzer, Op. 52” by Johannes Brahms and text by Georg Friedrich Daumer, in a world premiere orchestration by Jay Kowarsky, as well as “Serenade to Music” by Ralph Vaughan Williams with text by William Shakespeare. Dr. Bruce Chamberlain, director of choral activities at the University of Arizona, is retiring at the end of this spring semester, making this his final concert as conductor of the Arizona Choir.

Brahms’ beloved Liebeslieder Walzer were originally conceived as chamber music for vocal quartet and piano four-hands in 1868. Due to their popularity, he orchestrated several of them in 1870. In 2017, composer/theorist Jay Kowarsky has created a wonderful new chamber orchestration for the entire set. The Arizona Choir is thrilled to present this “world premiere” and to create the subsequent CD recording.

The Arizona Choir is the premier graduate choral ensemble at the University of Arizona Fred Fox School of Music. Internationally, the Arizona Choir has performed with the Budapest Chamber Orchestra at the famed Liszt Academy, the City of Prague Philharmonic in Vienna’s Musikverein and Prague’s Dvořák Hall. Convention appearances include ACDA, AGO, and AMEA. The Arizona Choir has partnered with professional touring groups including the Kronos Quartet and Ethel for performances on UA Presents concerts, with Tucson’s own Artifact Dance Project for a Tucson premiere of Menotti’s “The Unicorn, the Gorgon and the Manticore” and with True Concord for a performance of the Frank Martin Mass for Double Chorus, as well as Stravinsky’s “Les Noces” with the University of Arizona School of Dance.

Dr. Bruce Chamberlain is director of choral activities and associate director of the Fred Fox School of Music and founding director of the Tucson Symphony Orchestra Chorus, bringing to these positions 40 years of professional experience. Recent guest appearances have included the Dvořák “Stabat Mater” with the Plovdiv Philharmonic in Vienna’s Musikverein, the City of Prague Philharmonic in The Dvořák Hall in Prague, the Duruflé Requiem in Avery Fisher Hall in Lincoln Center, the International Conducting Institute at Westminster Choir College, the Daegu City Choir in South Korea, adjudicator for the Chongshin University International Conducting Competition, and guest clinician/conductor for the Sarang Presbyterian Church in Seoul, South Korea. During the summer of 2016 Chamberlain led an international faculty at the Varna International Conducting Academy in Bulgaria, preparing students from around the world for concerts featuring choral/orchestral literature. Guest conducting engagements in 2016 included a return engagement in Carnegie Hall conducting the New York City Chamber Orchestra in Mozart’s Requiem and the Gulfshore Opera’s fully staged production of Bach’s “St. Matthew Passion.” In 2017 the Arizona Choir partnered with True Concord for performances of “Elijah” and with the UA School of Dance for fully choreographed performances of Stravinsky’s “Les Noces,” commemorating the ballet’s 100th anniversary. During the 2017-2018 season Chamberlain conducted “Messiah” with the TSO, Verdi’s “Messa da Requiem” in a collaborative performance with True Concord and his Arizona Choir on the UA Presents concert series, and guest conducted the Gunsan City Choir in South Korea. In addition he prepared Bernstein’s Symphony No. 3, “Kaddish” for the Tucson Desert Song Festival and Beethoven Ninth Symphony and Adams’ “On the Transmigration of Souls” for the TSO Classics Series. A presentation at the ACDA conference in Pasadena, titled “K. 626: Requiem But No Rest” and a performance of Haydn’s “Creation” in Carnegie Hall rounded out the year. Chamberlain has also appeared with symphony orchestras in Russia, South Korea, Hungary, Czech Republic and numerous American orchestras. 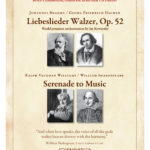