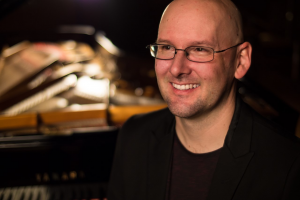 Called “the very model of a 21st Century musician” by critics of the Indianapolis Star, pianist Michael Kirkendoll has established himself at the forefront of contemporary pianism. A dedicated advocate for the music of the 20th and 21st centuries, Michael seeks out repertoire that combines beauty, adventure, and meaning to create musical journeys in the recital setting. A specialist in the theatrical piano music of Frederic Rzewski and others, critics have described Kirkendoll’s theatrical performances as “tours de force of skill, comprehension, and energetic, intelligent theatricality,” and also said “…to hear Mr. Kirkendoll perform Sunflower Sutra [by Jerome Kitzke] was an absolute wonder. Rarely have I seen any musician able to deliver text and poetry – all whilst playing insanely difficult music – with such natural dramatic sensibility.” Michael was a finalist n the 2009 American Pianists Association Classical Fellowship Awards, where his performances were heralded as “inspired” showcasing “extraordinary” technical gifts and “superior intelligence.” In 2018, with support from New Music USA, Michael released Acting Like a Pianist, Volume 1 direct to YouTube. This represents the first commercial video release of Rzewski’s De Profundis and Marriage. A limited-release double vinyl LP of Acting Like a Pianist, Volume 1 was released in 2019 by Meyer Media. His previous CD, Bison Circles:  Music of Forrest Pierce, is also available on Meyer Media, and multiple collaborations with members of the h2 Quartet can be found on Blue Griffin Records.

Michael’s contemporary programming has been featured in concert venues around the U.S., including New York’s Bargemusic, Spectrum, and Carnegie Hall, and on major recital series in Chicago, San Francisco, and Los Angeles. Michael appears regularly as artist-in-residence at major universities and conservatories, presenting recitals, masterclasses, and lectures on topics including entrepreneurship, contemporary repertoire and performance, building a virtuosic technique, and classes for composers. Internationally, Michael is a frequent guest in China and presented the opening recital for the first MTNA China Conference in Guangzhou in 2018. He has been named a Visiting Professor at the Shenyang Conservatory of Music, and was guest artist at Shanghai Conservatory’s major series Shanghai New Music Week in 2014.

Michael is the founder of the Cortona Sessions for New Music in (www.cortonasessions.org), which has produced over 500 world premieres and encouraged dozens of young performers and composers since 2010. Annually, members of the Cortona Collective (the faculty performance ensemble) present concerts featuring major contemporary repertoire alongside works of Fellows at universities and concert halls around the U.S. This new-music band includes members of the JACK String Quartet, International Contemporary Ensemble, Ekmeles Vocal Ensemble, h2 Saxophone Quartet, Boston Modern Orchestra, and other innovative and exciting soloists. In concert, they perform works by Cortona Sessions Fellows, and diverse repertoire spanning all aspects of contemporary composition. Michael is also president of the International Foundation for Contemporary Music, a 501(c)(3) nonprofit organization which supports the creation and performance of contemporary music through commissioning awards and concert events around the U.S. The IFCM oversees both the Cortona Sessions, and also Concerts @ the Hammert – a series bringing renowned contemporary musicians to the small town of Eudora, Kansas for intimate concerts and educational outreach presentations.

Michael is Associate Professor and Chair of Piano at the University of Kansas, where he earned his doctoral and bachelor’s degrees. He also holds a masters degree from the Manhattan School of Music. In addition to teaching at the Cortona Sessions for New Music, Michael is also on the faculty of the prestigious International Institute for Young Musicians. When not at the piano, Michael can be found enjoying fine wine, cooking, golfing, or falling over in his wife’s yoga classes. Michael is also a sommelier and CEO of Uncorked PIanist LLC, offering educational wine tastings and tours (www.uncorkedpianist.com). “The Uncorked Pianist” can be followed on Twitter and Instagram @UncorkedPianist. Michael Kirkendoll is proud to be a Yamaha Artist.