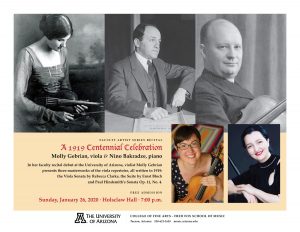 In her faculty recital debut at the University of Arizona, violist Molly Gebrian presents three masterworks of the viola repertoire, all written in 1919: the Viola Sonata by Rebecca Clarke, the Suite by Ernst Bloch and Paul Hindemith’s Sonata Op. 11, No. 4. Dr. Gebrian is a graduate of Oberlin College and Conservatory (with degrees in viola and neuroscience), New England Conservatory and Rice University. Prior to moving to Tucson, she taught for five years at the University of Wisconsin-Eau Claire.

1919 was a very important year for the viola: three of our most important sonatas were composed in that year, and so in 2019 (and early 2020) violists the world over are performing 1919 Centennial Celebration concerts to commemorate this event. Two of the works, the sonata by Rebecca Clarke and the Suite by Ernest Bloch were actually the two finalists in the 1919 Berkshire Festival Competition, sponsored by influential American arts patron Elizabeth Sprague Coolidge. Submissions were anonymous and in the end, it came down to the Bloch and the Clarke. The judges were deadlocked, unable to make a decision. There was much speculation as to the identity of the composers, with many wondering if the sonata by Rebecca Clarke was written by Ravel. Mrs. Coolidge was called upon to cast the deciding vote. She knew the identity of the composers and was personal friends with both Clarke and Bloch, but she ended up voting for the Bloch because she felt that a man winning would lend more legitimacy to the competition (which was only in its third year at that point). When it was revealed that a woman was the composer of the sonata by Clarke, the judges alternatively started disparaging the work (that they had previously thought so highly of) or asserting that Rebecca Clarke must be a pen name for a male composer.
The third piece on the program, the op. 11 no. 4 sonata by Hindemith, was not part of this competition (entries from composers from the Central Powers that the US had fought against in WWI were banned from entering the competition). Like the other two, this is a very standard and important part of the viola repertoire. It is a beautiful piece, full of different colors and characters, including one section that Hindemith instructs the violist to play with “bizarre clumsiness,” which is always fun to see how various players interpret this instruction. Additionally, both Clarke and Hindemith were violists and wrote for the instrument brilliantly. Because we so often steal music from other instruments, it’s wonderful to get to play two sonatas written for viola by violists.

Violist Molly Gebrian has distinguished herself as an outstanding performer, teacher, and scholar throughout the US and Europe. Her love of contemporary music has led her to collaborate with many composers, often in premieres of works written for her. She has worked closely with the Ensemble Intercontemporain and Pierre Boulez for performances at the Lucerne Festival and she spent the 2011/2012 academic year in Paris to undertake an intensive study of contemporary music with violist/composer Garth Knox. Her other principal teachers include Peter Slowik, Carol Rodland, and James Dunham. Molly completed her Doctor of Musical Arts in viola performance from Rice University’s Shepherd School of Music and also holds graduate degrees in viola performance from the New England Conservatory of Music, and Bachelors degrees from Oberlin College and Conservatory of Music, in both viola performance and neuroscience. She served as the Assistant Director for two interdisciplinary conferences on music and the brain while at Rice, has published papers dealing with music and neuroscience in the Journal of the American Viola Society, Frontiers in Psychology, Flute Talk Magazine, and The Strad. Her background in neuroscience gives her unique insight into how the brain learns and how musicians can best use this information to their advantage in the practice room. Given this expertise, she is a frequent presenter on topics having to do with music and neuroscience at conferences and universities in the US and abroad. During the summer, she is on faculty at the National Music Festival and Montecito International Music Festival, and has also taught at the Sewanee Summer Music Festival. After teaching for five years at the University of Wisconsin-Eau Claire, she joined the faculty at the Fred Fox School of Music at the University of Arizona in the fall of 2019. For more, please visit www.mollygebrian.com.