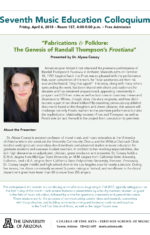 This colloquium is the seventh in a continuing series of lectures beginning in Fall 2017, typically taking place on the first Friday of the month. Each session features a presentation by a faculty member, student, or guest in the field of music education, followed by a time for questions, comments, and general discussion. These sessions are for the purposes of communicating current ideas and research, connecting with the profession, and building community among and between students and teachers in the Fred Fox School of Music, as well as the larger Tucson area. The April 6th colloquium will be the final presented during the 2017-18 academic year.

American poet Robert Frost attended the premiere performance of Randall Thompson’s “Frostiana” in Amherst, Massachusetts on October 18, 1959. Legend has it that Frost was so pleased with the performance that, upon completion of the work, he “rose spontaneously from his seat and bellowed, ‘Sing that again!’” This story, along with many others surrounding the work, has been shared with choirs and audiences for decades and has remained unquestioned, appearing consistently in program and CD liner notes as well as footnotes in countless theses and dissertations. Where, though, does this story originate, and how did it become a part of our choral folklore? By examining previously unpublished documents found at the Houghton and Jones Libraries, this session will challenge not only Frost’s reaction to the premiere performance but also the implied prior relationship between Frost and Thompson as well as Frost’s role (or lack thereof) in the project from conception to premiere.

Dr. Alyssa Cossey is assistant professor of choral music and music education at the University of Arizona where she conducts the University Community Chorus and the Wildcat Outreach Choir, teaches undergraduate secondary choral methods and advanced studies in music education for graduate students, and oversees student teachers. In addition to her teaching responsibilities, she is in high demand as an adjudicator, clinician, guest conductor, and presenter. Dr. Cossey holds a D.M.A. degree from Michigan State University, an M.M. degree from California State University, Fullerton, and a B.A. degree from California State Polytechnic University, Pomona. Previously, Dr. Cossey taught middle and high school choir in the Los Angeles area for nearly a decade. During her tenure, her choirs consistently received Superior ratings at festival, and enrollment in the choral department grew from fewer than 80 to more than 350 singers.