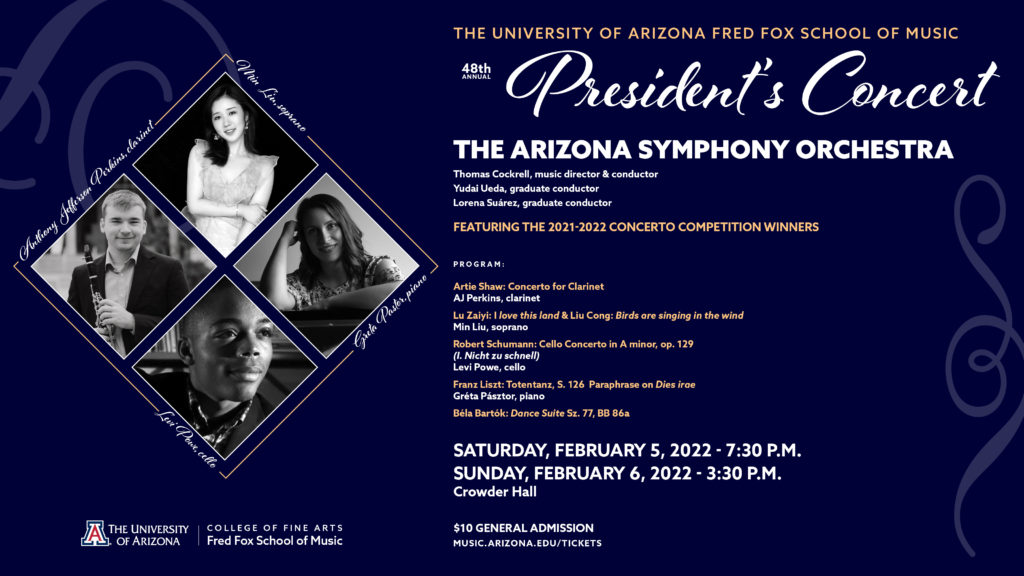 The students are selected from each area of the Fred Fox School of Music – strings, voice, wind and percussion, and keyboard. They represent the depth of talent at the school, shining in this performance with the Arizona Symphony Orchestra. Graduate students Yudai Ueda and Lorena Suárez will conduct the student’s performances. The program will also include “Dance Suite” Sz. 77, BB 86a by Béla Bartók, under the baton of Dr. Thomas Cockrell.

Min Liu obtained her bachelor’s degree in music education at Wuhan Conservatory of Music in 2016 under Professor Rong Zhang. Min graduated from the Boston Conservatory in voice performance for her Master of Music degree in 2019, where she studied with Professor Monique Phinney. Min is currently pursuing her DMA in voice performance at the University of Arizona under the direction of Professor Yunah Lee. Min will be featured as the role of Angelica of Puccini’s Sour Angelica in the Spring 2022.

AJ Perkins is a third-year music education major at the University of Arizona Fred Fox School of Music. He was raised in Tempe, Arizona and attended Corona Del Sol High School, where he was the recipient of the John Philip Sousa award and a member of the AMEA All-State Bands. AJ is currently principal bass clarinet with the UA Wind Ensemble, a member of 7REED5 reed quintet, and clarinet section leader of the Pride of Arizona Marching Band and pep band. AJ is a student of Dr. Jackie Glazier.

Levi Powe, age 21, started playing cello with the Suzuki method at the age of three, and is currently studying with Dr. Theodore Buchholz at the University of Arizona. In 2018, Levi was selected as the first-place laureate of the Sphinx Competition, and throughout his career has been a participant in numerous local competitions. Levi has performed as a soloist with many orchestras, including New World Symphony, Buffalo Philharmonic, the Sphinx Symphony, South Bend Symphony, the Tucson Symphony, Battle Creek Symphony, the Civic Orchestra of Tucson, and Southern Arizona Symphony Orchestra. In 2016, Levi was a member of National Youth Orchestra 2 in its inaugural season, with Carnegie Hall. Currently, Levi studies at the University of Arizona, majoring in economics and minoring in cello performance. He is a black belt in Shotokan Karate, and enjoys outdoor things such as hunting, fishing, and hiking from time to time.

Gréta Pásztor is a first year DMA student pursuing a Doctor of Musical Arts degree from the University of Arizona in piano performance, studying with Dr. John Milbauer. She previously earned master’s degrees in piano performance and choral conducting from Kent State University (2021), as well as bachelor’s degrees in keyboard performance and music theory from Baldwin Wallace University (2018). Her former piano teachers include Dr. Donna Lee, Dr. Sungeun Kim and Zoltán Horváth. Her passion for music has started at an early age and has grown since. Gréta was born in Cluj-Napoca, Romania, and started playing the piano at the age of six. To date, she has participated in several local and national piano competitions and has been awarded for her academic and musical achievements. In 2011 and 2013 she received 2nd Prize at the Romanian National Instrumental Competition and 2nd Prize at the National Piano ArtIs Competition in 2012. Gréta also received the Franz Liszt Prize (2012) and the Special Prize (2013) and at the Pro Piano Romania Festival. Gréta and her piano duo partner, Alexandre Marr recently won 1st Prize in the 2021 Gloria Artis International Music Competition. Gréta also won several concerto competitions during her studies, giving her opportunities to perform with the Sigismund Toduta High School Orchestra, Kent State University Symphonic Orchestra, Stow Symphony Orchestra, and this year with the Arizona Symphony Orchestra. Her goal is to become an active performer and an inspiring pedagogue.