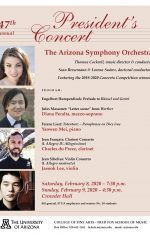 The students are selected from each area of the Fred Fox School of Music – strings, voice, wind and percussion, and keyboard. They represent the depth of talent at the school, shining in this performance with the Arizona Symphony Orchestra. Their performances will be conducted by doctoral students Sean Bresseman and Lorena Suárez, as well as Music Director and Condoctor, Dr. Thomas Cockrell.

Charles du Preez hails from rural Nebraska, where he cultivated a love for classical music at an early age. He received his Master of Fine Arts degree in music performance from the California Institute of the Arts, and is now pursuing his Doctor of Musical Arts degree in clarinet performance with an individualized minor in electro-acoustic music and multimedia at the University of Arizona. He is currently studying clarinet with Dr. Jackie Glazier and is a graduate teaching assistant for the clarinet studio. He currently serves as a substitute with the Tucson Symphony, the New Mexico Philharmonic, and the Southern Arizona Symphony. Recent endeavors include participating at the Pierre Monteux School and Festival for Conductors and Orchestral Musicians (Summer 2019), competing as a finalist in the International Clarinet Association Orchestral Audition Competition (Ostend, Belgium 2018), performing at the San Luis Potosí Opera Festival (Mexico 2018), and presenting at the American Single Reed Summit (2018). He has been selected as a Medici scholar for the past two years. Charles also enjoys practicing qi gong and yoga, running and triathlons, and is an ACSM certified personal trainer.

Violinist Jaeook Lee has garnered international recognition for his performances as a soloist, recitalist, and chamber musician. His rise in accolades began in South Korea where he received top prizes at numerous competitions, including the Strad, Kookmin, Elwha & Kyunghyang, and the Music Journal competitions. His early success included several appearances, including his prize-winning performance of Tchaikovsky’s Violin Concerto at the Great Mountain Festival. Other engagements included solo appearances with Joy for Strings and the Suwon Philharmonic Orchestra. Lee was given the special honor to represent the Kumho Cultural Foundation of Young Artists in Korea. His endeavors have continued internationally through his studies with Glenn Dicterow, Kyung-Wha Chung and Sylvia Rosenberg at the Juilliard School. He made his American debut in Alice Tully Hall at Lincoln Center where he won the special prize at Concours International Yehudi Menuhin. Lee recently won the third prize at the Munetsugu Angel Violin competition, which generously awarded him the loan of the “Ex-Shultz” 1831 Giovanni Francesca Pressenda violin. Lee’s work as a chamber musician includes a broadcast appearance on “Good Day Chicago” as a participant in Ravinia’s Steans Music Institute. Lee has also received invitations from the Verbier Festival Academy and concertizes through the Harvard Society. Lee earned his bachelor’s from the Juilliard School and master’s from the New England Conservatory under the tutelage of Miriam Fried and Donald Weilerstein. He is currently pursuing doctoral degree in music at the Fred Fox School of Music under the direction of Timothy Kantor.

Yaowen Mei is a freshman piano performance major at the University of Arizona Fred Fox School of Music, where he studies with Dr. Daniel Linder and Dr. John Milbauer as a recipient of the Lotte C. Reyersbach Scholarship. Before moving to Tucson, he earned the Professional Studies Diploma from the San Francisco Conservatory of Music, where he studied with Yoshikazu Nagai. Yaowen grew up in Huaihua, Hunan Province, China. He began piano studies at the age of eight and only two years later won first prize in the Golden Melody Piano competition in Huaihua City. Shortly thereafter, he entered the Wuhan Conservatory of Music, where he studied with Fang Kuang and Dr. Hong Xu. Among his numerous accolades are prizes in the Fulixi Piano Competition (2011), the Yamaha Music Scholarship Piano Competition at the Wuhan Conservatory (2013, 2014), the Eastman Young Artists Piano Competition (2016), and most recently, the University of Arizona Concerto Competition (2019).

Mezzo-soprano Diana Peralta was born in Mexico City and graduated from the National Conservatory of Music with a degree in opera and concert singing. She is currently working toward her Master of Music degree in voice performance at the University of Arizona. Recent performances include her 2018 debut in the title role of “Carmen” with San Luis Opera Festival (Mexico), a role she repeated with Opera de México in 2019. Also in 2019, Ms. Peralta performed Cherubino in “Le Nozze di Figaro” with the Jerusalem Opera Studio in Israel as well as the title role in the American première of “Rhondda Rips It Up” (University of Arizona.) Her other operatic roles also include Donna Elvira (“Don Giovanni”), Mercedes (“Carmen”), Mme de la Haltiére (“Cendrillon”), Charlotte (“Werther”), Zweite Dame and Dritte Dame (“Die Zauberflöte”). As a concert soloist, she has performed Handel’s “Messiah,” Beethoven’s 9th Symphony, Mozart’s Requiem and Rossini’s “Petite Messe Solennelle” (Choral Society Of The Hamptons in New York City). She is a winner of the 2019 University of Arizona Concerto Competition, second place in the Amelia Rieman Opera Competition and the Marguerite Ough Vocal Competition, and first place in the Opera Guild of Southern Arizona Quest for the Best opera competition, the Opera Panamá Award in the Linus Lerner Vocal Competition, Guanajuato winner of the Gertrude Brownlee Bitner Memorial Award, and first-place winner in the Vienna Summer Music Festival Vocal Competition. Upcoming performances for Diana Peralta include Hänsel in the UA Opera production of “Hänsel und Gretel” and the title role in “Carmen” with the Vienna Summer Music Festival.