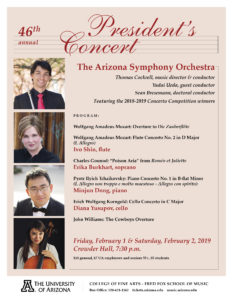 The students are selected from each area of the Fred Fox School of Music – strings, voice, wind and percussion, and keyboard. They represent the depth of talent at the school, shining in this performance with the Arizona Symphony Orchestra. Their performances will be conducted by doctoral student Sean Bresseman and faculty guest conductor Yudai Ueda. The program will also include Mozart’s Overture to “Die Zauberflöte” and “The Cowboys Overture” by John Williams, under the baton of Dr. Thomas Cockrell.

Ivo started studying the flute with his aunt Regina Lima at the age of 13. Soon after, he entered the pre-college program at Rio Grande do Norte Federal University (UFRN) where he studied with Rodrigo Gouveia. At the age of 18 he began his undergraduate studies with Alexandre Johnson at UFRN. During this time he participated in the university’s orchestras and attended master classes with Sergio Barrenechea (UniRio), José Ananias (OSESP), Jorge Salgado Correia (University of Aveiro), Julie Koidin (Chicago), Toninho Carrasqueira (ECA-USP) and Philippe Bernold (Paris Conservatory). Ivo has performed in the Orfeo concert series at UFRN and with mentor flutists in the university’s orchestra. Besides being an active performer, Ivo is also committed strongly to teaching. After finishing his undergraduate studies he was a substitute teacher at UFRN and taught flute for Programa Nacional de Acesso ao Ensino Tenico e Emprego (National Program of Access to Technical Education and Employment). He is now a second-year master’s student in flute performance under the instruction of Dr. Brian Luce, and a member of the Fred Fox Graduate Wind Quintet.

Erika Burkhart’s soprano voice has been praised as “simply sublime,” with colors “ranging from bright and mischievous to somber and resonant.” (Arizona Daily Star). She has sung extensively in Arizona as a soloist and ensemble artist. Erika is a regular soloist and ensemble member with True Concord Voices & Orchestra, and sang on that organization’s Grammy-nominated recording, “Far in the Heavens.” Equally comfortable in formal and less traditional concert settings, she delighted younger audiences during her two seasons as a teaching artist with Arizona Opera, performing in schools around Arizona. Her more conventional operatic credits include Zerlina in “Don Giovanni,” Despina in “Così fan tutte,” Carolina in “Il matrimonio segreto” and Sarah Good in “The Crucible.” She will appear as Le Prince Charmant in the University of Arizona’s spring opera, Massenet’s “Cendrillon.” As a concert soloist, Erika recently sang the world premiere of Gerald Near’s “Through the Long Winter’s Day” with True Concord. This summer, she performed J.S. Bach’s Cantata BWV 132 with the SongFest Bach Cantata Institute in Los Angeles under the direction of John Harbison, and Fauré’s Requiem at the Des Moines Choral Festival with CORO Vocal Artists. Erika earned a Bachelor of Music degree from the University of Arizona, where she is currently pursuing a Master of Music degree in performance under the direction of Dr. Kristin Dauphinais.

Minjun Dong is a second year doctoral student of Dr. John Milbauer at the University of Arizona. He began piano studies at age four in Chengdu, China and then continued with Prof. Hanguo Yang at the Sichuan Conservatory until age 18. Mr. Dong won many top prizes in regional and national competitions before moving to the United States in 2010. Minjun earned an undergraduate degree at the Cleveland Institute of Music studying with Prof. Paul Schenly and Dr. Daniel Shapiro before earning his master’s degree at the San Francisco Conservatory of Music with Mr. Jon Nakamatsu. He has participated in master classes with Leon Fleisher, Garrick Ohlsson, Jon Kimura Parker, Yehoved Kaplinsky, Boris Berman, and Jim Giles. In addition to his studies, Minjun maintains a graduate teaching assistantship as the pianist for UA Opera Theater. Besides playing piano, Minjun Dong enjoys cooking cuisines of different cultures and—having worked in an Italian restaurant during his studies at CIM—is as adept at risotto alla Milanese as Sichuan mapo tofu.

Diana Yusupov began studying cello at the age of eight in Tashkent, Uzbekistan. Her family migrated to Australia in 2003, where she continued studying cello with her father, Renat Yusupov, and later with Markus Stocker. In 2009 Diana completed her Bachelor of Music degree at Queensland Conservatorium of Music, where she was awarded first prize in the Piatti Competition, Sonata Prize, Bach Competition and Concerto Competition. She participated in master classes with Peter Burns, Steven Isserlis and Jian Wang and graduated with the Academic Excellence Award. In addition, she earned a graduate diploma in education in 2010 from the University of Southern Queensland and spent the next five years building a string program and teaching music in elementary and high school programs in Australia. In 2016 Diana came to the University of Arizona to pursue a Master of Music degree in performance in the cello studio of Dr. Theodore Buchholz, and was awarded the Outstanding Graduate Teaching Assistant Award for the College of Fine Arts. Currently Diana is pursuing a Doctor of Musical Arts degree and continues to be a member of the University of Arizona Graduate String Quartet. The quartet earned an award at the Music Teachers National Association Chamber Music Competition, and this season the group was awarded fellowships to study with the Afiara and Dali string quartets in Canada and Philadelphia. Last fall they travelled to China to perform at Sias University and Wuhan Conservatory. Diana’s passion lies in chamber music and teaching. She works at Tucson High School as the assistant orchestra director and teaches cello lessons for the University of Arizona String Project.