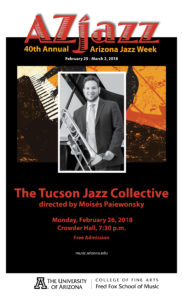 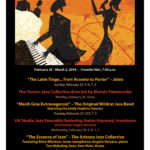 
The University of Arizona Saxophone Studio is pleased to present our Spring 2021 Studio Compilation Video! In this video, the saxophone studio will be performing classical saxophone repertoire, jazz tunes, and jazz transcriptions. Because of the challenges this semester, some of the performances that you will see will not have piano accompaniment. In place of this, pieces that do require piano will be performed unaccompanied, or the student will be performing with a backing track. We are very excited to present this compilation video for you, and we hope that you do enjoy it. Thank you!

Students: Are you planning to participate in an in-person commencement ceremony? Make sure to schedule your COVID-19 test as soon as possible, either through the Arizona system or an off-campus testing center. Find more information about requirements: . ... See MoreSee Less

The “Embrace Our Roots to Build Solidarity” concert will be premiered on the Arizona Arts YouTube channel on May 15th at 4 PM.

This event is co-presented by Arizona Arts, Applied Intercultural Arts Research Program at the University of Arizona, and Tucson Chinese Cultural Center. In this concert, musicians from different cultures will come together to perform music in celebration of the Asian American Pacific Islander heritage and in support of solidarity to unite people across borders. This concert features 25 international artists along with 7 speakers from East Asian Studies, Asian Pacific American Student Affair, Pima County Public Library, and National REACH Coalition. These artists will bring the music from China, Japan, Korea, India, Hawaii, Argentina, Greece, Mexico, and the Middle East. ... See MoreSee Less

It’s a big day for the members of HarpFusion @uazmusic 😊 We are offering a program of all-new arrangements for harp ensemble at the vaccine POD on campus. This is our first performance as an ensemble (non-solo) since March 2020, when our tour to Iceland was cut short due to the pandemic.
Today’s program features several original works by Bailey Stephenson and Marina Tiffany. We’re also including Ceili, our HarpFusion anthem, and a reprise of Saeglopur by Sigur Ros from our Iceland tour (arranged by Yvonne Cox!)

We are planning to stream live today from the site! If you’d like to tune in, here is our set list:

Not Staying - written and arranged by Bailey Stephenson

Be Not Afraid - written by Marina Tiffany

Thank you to the University of Arizona volunteers for working so hard to protect this community! 🌵 ☀️ 🎵 💙 ... See MoreSee Less

TURN UP promotes equality and inclusion, culture-connecting, and interdisciplinary collaboration. We are especially interested in partnering our performers with composers and artists from different geographic locations, cultures, and/or gender identities.