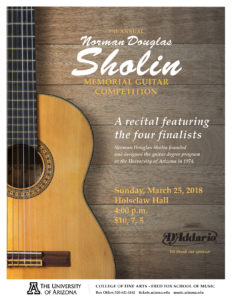 The University of Arizona Fred Fox School of Music presents the 37th Annual Sholin Guitar Competition, honoring the memory of Norman Douglas Sholin (1951-1980). The concert, sponsored by the D’Addario Company, will be held on Sunday, March 25, 2018 at 4:00 p.m. in Holsclaw Hall. 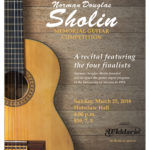