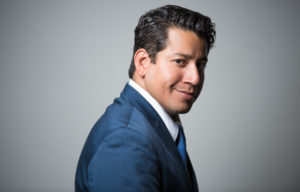 Fred Fox School of Music alumnus Humberto Borboa Beltrán (MM Voice Performance 2014) shares some thoughts about his experience during this ongoing pandemic, along with videos for everyone to enjoy.

“At the beginning of the lockdown orders, as a performing artist and educator, the news of possible cancellations of shows were frightening but totally understandable, and for the best when they were announced. With no live shows on the horizon, still it was music that kept on motivating me to stay creative every day. Eventually I got a guitar and started learning songs that I’ve always loved, especially Mexican boleros. Then I started virtually collaborating with artists that otherwise I wouldn’t have the chance to perform with due to their busy calendars. First, I collaborated with Dr. Lindsay Garritson based in Miami. We recorded Robert Schuman’s “Dichterliebe” 1-7 beautiful songs, and later on the well-known piece “songs my mother taught me” from the cycle Gypsy Songs by Antonín Dvořák. A couple of months later, in another virtual collaboration with pianist Sun Kyeong Kim from Tampa, we recorded Franz Liszt’s “I vidi in terra angelici costumi” from the “Petrarch Sonnets.”

“It has been four months into this pandemic, and I’m really grateful for being able to keep teaching voice, even though it’s virtually, and to continue singing for my church, including virtual rehearsals and sending in videos for their online services.
“With so much sad news, I want to bring people a message of joy, peace and hope by flooding my social media with ‘Music in Covid-19 Times’ by sharing videos of my virtual collaborations and live recitals, or even at home singing with my wife, Jovahnna. Now, more than ever, any art form should never stop as we need it to feed our soul.”

Humberto shares three of the recording he has created during his time sheltering at home:

Originally from Mexicali, Baja California, Humberto Borboa is a passionate performer and teaching artist, praised by the Arizona Daily Star as “a powerful and bright tenor.”

Humberto has been an apprentice artist for Tulsa Opera, Central City Opera, and San Diego Opera, where he made his San Diego debut as Borsa in Verdi’s “Rigoletto.” He has been a featured soloist in various opera companies across the U.S. and Mexico and has performed abroad in Antigua, Guatemala, Austria, Italy, and the Czech Republic. Holds a MM from the University of Arizona (2014), and a BM from Escuela Superior de Canto de Mazatlán (2012).

Humberto leads San Diego Guitar Festival’s outreach program, as he recently was appointed director of education. He believes in sharing the joy and importance of music and has already created a positive impact in communities via outreach programs with San Diego Opera and San Diego Symphony. Currently Humberto serves as a teaching artist for San Diego Opera’s program Words and Music, where youth from Memorial Preparatory and Lincoln High School are guided through a creative process to write and sing their own compositions, the students are able to raise their voice and tell their stories of struggle and triumph through the power of music in different genres.

Humberto enjoys singing both leading and supporting roles, as well as singing in the chorus of the Chicago Symphony Orchestra and Lyric Opera of Chicago, where he has performed under the baton of prestigious conductors such as Sir Andrew Davis, Marco Armiliato, Yannik Nezet-Seguin and Riccardo Muti. In San Diego County he has performed with Bohdi Tree Concert Series, Genesis Opera, Musica Vitale, San Diego Guitar Festival, San Diego Opera and is a cantor at La Jolla Presbyterian Church.

Upcoming performances have been cancelled due to Covid-19:

Recitals with San Diego Opera Young Artists in Ramona and San Diego, singing in the chorus for Wagner’s “Die Götterdämerung” with the Lyric opera of Chicago, recital of soprano and tenor duets with Tanya Dibal and an art song recital both in Chicago venues, chorus in Mahler’s Symphony No 2 with the New York Philharmonic at the Bravo Vail Festival in Colorado. Role debuts of Alfred in “Die Fledermaus” with Pacific Lyric Association, Fernando in “Goyescas” with Genesis Opera in Escondido, California, and Ralph in G. and S. “H.M.S. Pinafore” with Bohdi Tree in San Diego.